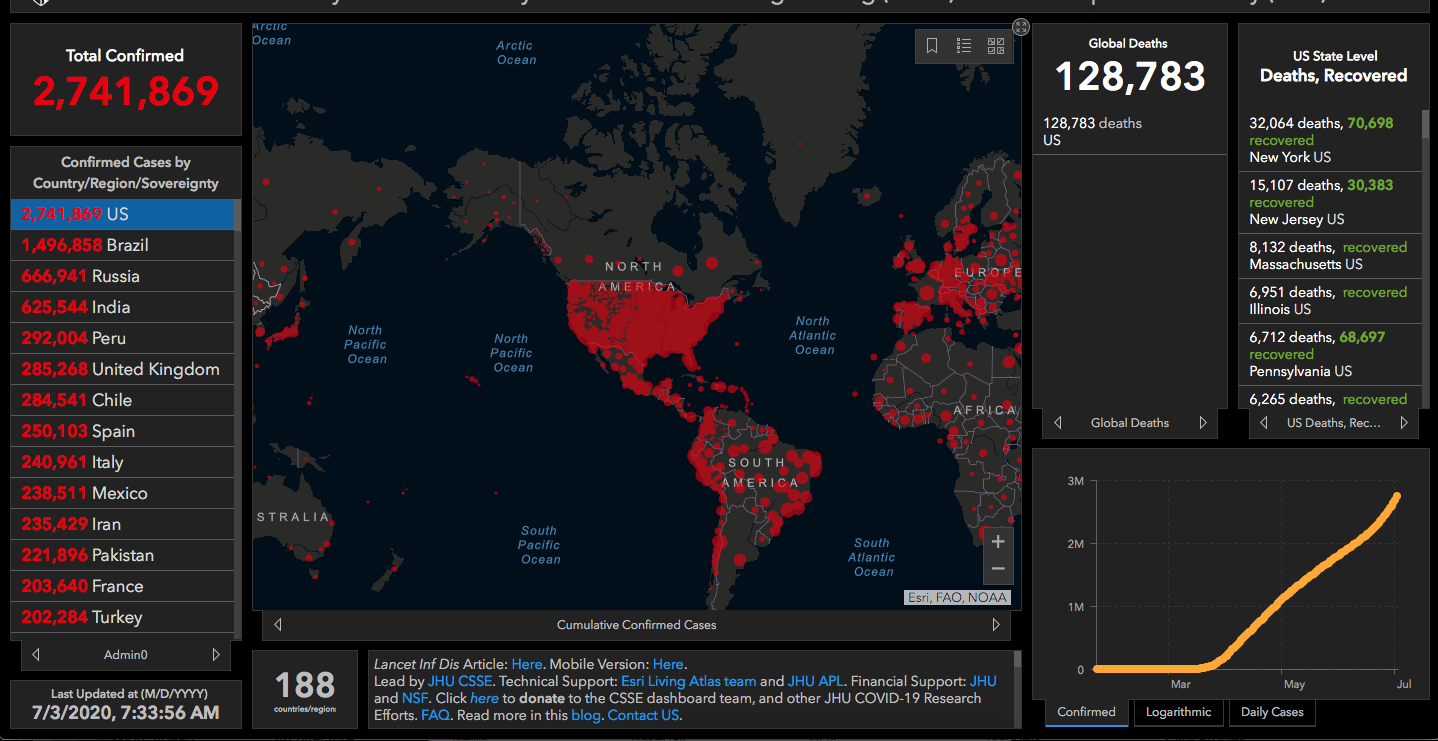 This is what President Donald Trump’s “handled” pandemic looks like.

The United States, the world leader in Covid-19 infections and deaths, is reeling from an out-of-control resurgence of the virus that is racking up record numbers of 50,000-plus new infections each day now.
Texas, Florida and Arizona — Republican-run states that most aggressively embraced Trump’s impatient demands to get the economy open again — are heading into what one expert warned is a viral threat that is approaching “apocalyptic” levels.
All over the country, including in rule-resistant Texas, authorities are imposing mask mandates that Trump will still not endorse and are slowing or reversing economic opening plans as a Covid-19 summer becomes reality. It now seems certain that a predicted fall spike of the virus will simply become an extension of relentless months of sickness and death.
Even Vice President Mike Pence, who rarely pauses his praise of Trump’s “leadership,” is beginning to see reality — ditching his previously misleading claims that the US has “slowed the spread” as he instead vows to “flatten the curve.” Meanwhile, 2012 Republican presidential candidate Herman Cain, who as co-chair of Black Voices for Trump was one of the surrogates at Trump’s recent rally in Tulsa, Oklahoma, is now in the hospital with coronavirus.
None of this will stop Trump from heading to Mount Rushmore on Friday to bracket himself alongside the carved likenesses of four of America’s greatest Presidents for an early Independence Day celebration that will ignore his own government’s social distancing guidelines. Then Trump will return to Washington to watch the federal government’s July 4 fireworks spectacular that is going ahead, even though it could draw thousands of people into downtown and imperil the city’s fragile resurgence from its coronavirus nightmare.
Warnings by medical experts that this weekend’s gatherings could produce even more disastrous infections than Memorial Day events mean this is hardly a time for national celebration.
That’s why Trump’s hyperbolic and misleading embrace of encouraging unemployment figures on Thursday — he could barely wait an hour after their release before materializing for a boastful soliloquy in the White House briefing room — seems so off key and selective. The President’s desperation to tout some good news after so many grim weeks of controversy mostly served to exemplify the depth of his own political plight against a backdrop of what seems like an never-ending fight against the virus. The White House’s victory lap — when nearly 130,000 Americans are dead in a pandemic Trump initially ignored, then mismanaged, then ignored again — exemplifies its perverse insistence to concentrate only on the economic pain caused by the national crisis rather than infections that are rising dramatically.
While everyone can be encouraged that the jobless rate surprisingly slipped to 11.1% in June, the news of rising cases and cities under siege that Trump dismissed could make Thursday’s data a false dawn. Bars, restaurants and shops are closing again across the country — including in California, which is facing a prolonged disaster — in a way that could again surge job losses and stifle the rebound which Trump is willing to inflate beyond any connection with reality to boost his reelection hopes.
Trump appeared before reporters just hours after the US reached its worst-ever daily total of new infections of 51,174 on Wednesday. That record would only stand for 24 hours as the US broke its record again with 51,504 new cases reported late Thursday.

But the President had other records on his mind.

“There’s not been anything like this — record setting. It was just put out that the United States economy added almost 5 million jobs in the month of June, shattering all expectations,” the President crowed. “Today’s announcement proves that our economy is roaring back.”
In what are becoming daily examples of a dereliction of duty, the President massively misrepresented the state of the pandemic.
“The crisis is being handled. … Some areas that were very hard-hit are now doing very well. Some were doing very well, and we thought they may be gone and they flare up, and we’re putting out the fires,” he said.

The dispiriting data on the pandemic that poured like a gusher on Thursday gave the lie to Trump’s assessment that the crisis is being “handled.”
Florida Republican Gov. Ron DeSantis, one of Trump’s most aggressive partners in pushing toward swift economic openings that defied US Centers for Disease Control and Prevention guidelines, is insisting he won’t close down the economy even though his state recorded a new record of 10,000 new cases on Thursday. Texas came in with nearly 8,000 more new cases, just a few short of its worst-ever day on Wednesday. Arizona reported more than 3,000 new infections Thursday after its worst day so far on Wednesday when it reported more than 4,800.
In a landmark move that broke with the President’s resistance to mandates, Texas Gov. Greg Abbott, a Republican, said he would now require all Texans to wear a mask when out in public if they were from counties where more than 20 coronavirus cases had been recorded. He showed Texans graphs showing rocketing infection rates, positivity rates for tests and hospitalizations.
“These numbers reveal a very stark reality. Covid-19 is not going away. In fact, it is getting worse,” Abbott said.
Another one of Trump’s band of early opening Republican governors, Brian Kemp of Georgia, said people should “do the right thing” and wear a mask.
While Trump refuses to set an example by wearing one before the cameras, many experts expect things to get worse still.
“It’s set up a perfect storm: the combination of travel, the combination of reopening — perhaps in some cases, too early — and the combination of people not necessarily following some of these preventive guidelines,” Dr. Joshua Barocas, an infectious disease physician at Boston Medical Center, told the Infectious Diseases Society of America.
Dr. Peter Hotez, an infectious diseases specialist who leads the school of tropical medicine at Baylor, warned that Texas, Arizona and Florida are close to entering “apocalyptic” territory in terms of new infections.

‘Wrong on both fronts’

Even for a President who makes a habit of framing reality to fit his political priorities, Trump’s comments about the economy on Thursday were stunning, and in the circumstances, callous. But there were also flickering signs of anxiety in Trump’s bravado. At one point, he warned that if presumptive Democratic nominee Joe Biden won the presidency, there would be an economic crash of 1929 proportions. Trump did not apparently spot the irony that his denial that the pandemic would be a problem for the US contributed to a lack of preparedness, helping to trigger the worst economic crisis since the Great Depression.
Trump did not stay to answer questions about the virus, but left Treasury Secretary Steven Mnuchin and Director of the National Economic Council Larry Kudlow to downplay scary warnings by the government’s top infectious disease expert Anthony Fauci that the virus is surging and could produce case counts of 100,000 new infections per day.
“I think what Dr. Fauci said is that if people don’t take these things seriously, that the numbers could continue to spike,” Mnuchin said.
Fauci, banished to UK radio, even as US media outlets press the White House for him to speak to Americans, directly contradicted Trump.
“In the United States, even in the most strict lockdowns, only about 50% of the country locked down — that allowed for the perpetuation of the outbreak, which we never did get under very good control,” Fauci told BBC Radio 4’s flagship “Today” program.
“The problem we’re facing now is the attempt to reopen or open the government and get it back to some form of normality. We’re seeing very disturbing spikes in different individual states in the United States,” he added.
Another top government health official, Adm. Dr. Brett Giroir, blew a hole in another one of Trump’s falsehoods — the claim that cases are only going up because the US is doing more coronavirus testing.
“There is no question that the more testing you get, the more you will uncover — but we do believe this is a real increase in cases, because the percent positives are going up. So, this is real increases in cases,” Giroir told the House Select Committee on the Coronavirus Crisis on Thursday.
Biden accused Trump of wanting to move on from the crisis to concentrate on his reelection bid.
“Trump wants to declare his health crisis over and unemployment solved. Unfortunately, he’s wrong on both fronts,” the former vice president said on Thursday. Noting the number of lives lost, Biden added: “That’s a direct consequence of Donald Trump’s bungled leadership and a totally mismanaged crisis from the start.”