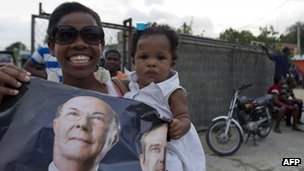 All support is welcome: Hipolito Mejia is trailing in the opinion polls

Two veteran politicians are contesting a poll in the Dominican Republic after a presidential campaign dominated by concerns over rising food and fuel costs.

Opinion polls puts the candidate of the governing party, Danilo Medina, just ahead of the challenger, Hipolito Mejia.

Crime and drug-related violence are also major issues in the campaign.

More than 300,000 of them live abroad, many of them in New York, where supporters have organised parades in support of their candidates. 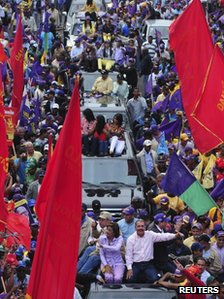 The opposition has accused Danilo Medina of spending too much

His Dominican Liberation Party (PLD) has appointed a 60-year-old economist, Danilo Medina, to run in election.

His opponent is also an old rival and an experienced politician.

Seventy-one-year-old Hipolito Mejia was the country’s president from 2000 to 2004.

But his term in office was marked by a serious financial crisis.