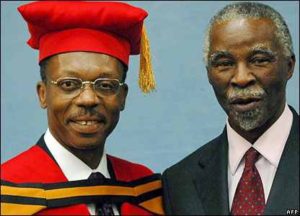 By POOJA BHATIA and DAMIEN CAVE

Mr. Aristide’s longtime lawyer, Ira Kurzban of Miami, accused the United States and France of interfering with his client’s efforts to go home, while in Port-au-Prince, the mood at Mr. Aristide’s refurbished residence has been dampened.
“We were sure President Aristide would be here by now,” said one of the caretakers, Cerdene Blanc, 35. “Personally, I’ll never stop believing he will return, but I don’t know when anymore.”
Determining when or if Mr. Aristide might return from his exile in South Africa continues to be difficult. American officials have clearly stated that they oppose efforts to bring him back before Haiti’s March 20 runoff election, arguing that Mr. Aristide’s presence would create instability — a charge his supporters deny. They see Mr. Aristide, a former Catholic priest, as Haiti’s conscience, a true democratic leader, who could pressure the government and international donors to help the poor.
Nonetheless, international opposition is a concern, according to Mr. Kurzban, because all commercial flights from South Africa fly through countries allied with the United States.
“The idea that Aristide can simply get on a plane and come back to Haiti ignores the fact that he’s not just a Haitian citizen returning home,” Mr. Kurzban said. “There are security concerns and powerful governments that have already expressed a desire to keep him out of the country.”
In the midst of such vague diplomacy, however, it is not clear whether a private flight would be held on the ground by the South African authorities, or if it would be allowed to land in Haiti. While Haiti’s top officials — including the president and prime minister — have said Mr. Aristide had the right to return, they have failed to outline specific plans for it, especially in terms of security.
A letter to the Foreign Ministry from Mr. Kurzban requesting that Haiti work with South Africa to ensure Mr. Aristide’s return has received no response. And last Thursday and Friday, several Haitian officials either refused to talk about Mr. Aristide or insisted that other issues were more important.
“This country needs to be rebuilt and that needs to be the priority right now,” said Alice Blanchet, a special advisor to Prime Minister Jean-Max Bellerive.
Some supporters, acknowledging disappointment, have even begun to think that it might be better for Mr. Aristide to wait. That may mean trying to return under a new president who would be less friendly that the current president, René Préval. But Patrick Elie, a political activist who has served in the Aristide and Préval governments, blamed Aristide’s own political organization, Fanmi Lavalas, for failing to build widespread support and to “prepare the return of somebody who is a living symbol.”
Echoing the concerns of many, he added, “I won’t sit back and let him become a martyr.”