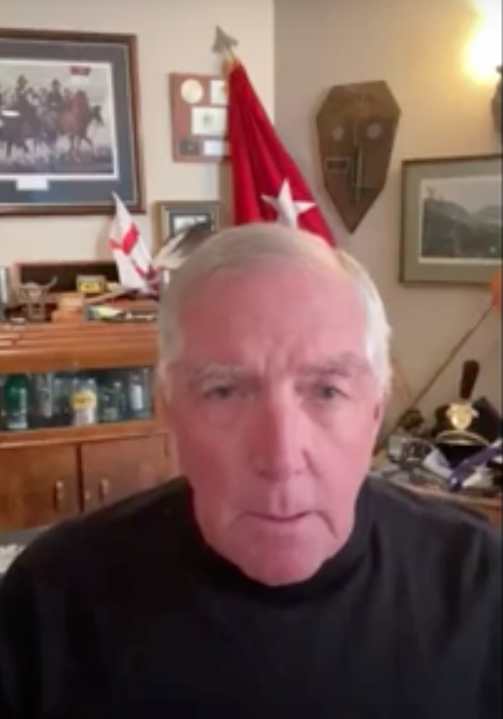 A retired Army general on Thursday night went viral for his scathing response to a report that President Trump made disparaging remarks about dead U.S. service members, telling Trump he’s “no patriot.”

Retired U.S. Army Maj. Gen. Paul Eaton posted a video responding to a new report in The Atlantic which detailed Trump allegedly calling the U.S. service members who were buried in a French cemetery during World War I “losers.”

The magazine also reported that Trump referred to U.S. Marines who were killed at Belleau Wood during World War I as “suckers” because they died.

“I’m pretty unhappy with you, Mr. Trump. So I’m going to keep this short for your famous short attention span,” Eaton said in the clip. “You have shown disrespect to the military on countless occasions. I am stunned that anybody in the United States military would consider you anything but a ‘loser’ or a ‘sucker.’ You’re no patriot.”

Eaton pulled out the dog tags found at the crash site from where his father, a fighter pilot, was killed during the Vietnam War in 1969.

“Our Army, our Navy, our Marine Corps, our Air Force, our Coast Guard. Brave men and women. They’re not just brave. They’re smart and wise,” Eaton said in the video. “So, Mr. Trump, come Nov. 3, we’re all voting for a real patriot — Joe Biden. And everybody who hears this, please take notice and please vote. Vote Democratic. Our country’s honor depends on it.”

Read Jeff Goldberg’s article in The Atlantic. How could anyone support Trump? pic.twitter.com/xqfnklmCBq

Eaton is an adviser for VoteVets, the nation’s largest political action committee that supports liberal veterans for public office.

The organization also issued a response condemning Trump’s reported remarks, calling them “especially egregious” coming from the commander in chief.

Trump has faced widespread backlash following the release of The Atlantic’s report. It also alleged that Trump told senior staff he wouldn’t support the late Sen. John McCain’s (R-Ariz.) funeral and grew angry when he saw flags at the White House lowered to half-staff to recognize the senator.

Biden, the Democratic presidential nominee, condemned Trump’s reported comments and said the nation’s “one truly sacred obligation” is to care for military members and their families, both during their deployment and after they return home.

Trump vehemently denied The Atlantic’s reporting, angrily calling it “fake news” and a “disgrace” and suggesting the author and his sources are “liars.”

“If they really exist, if people really exist that would have said that, they’re low lifes and they’re liars. And I would be willing to swear on anything that I never said that about our fallen heroes. There is nobody that respects them more,” Trump told reporters at Joint Base Andrews after a campaign stop in Pennsylvania Thursday evening.

On Twitter, he insisted that while he disagreed with McCain on policy issues, he approved the lowering of the flag to half-staff and the use of an Air Force plane to transport McCain’s casket from Arizona.

Trump also denied ever calling McCain a loser, saying that he would “swear on whatever, or whoever, I was asked to swear on, that I never called our great fallen soldiers anything other than HEROES.”

However, many social media users resurfaced Trump’s remarks in 2015 where he said McCain, a Vietnam veteran who was a prisoner of war in North Vietnam, wasn’t a war hero “because he was captured. I like people who weren’t captured.”

They also noted that Trump shared a link to an article about his remarks with the headline “Donald Trump: John McCain Is ‘A Loser.’ ”

Here’s what you said on camera. Can’t imagine the things you said in private. You are a traitor and a total disgrace! RESIGN! pic.twitter.com/izpfogtjep