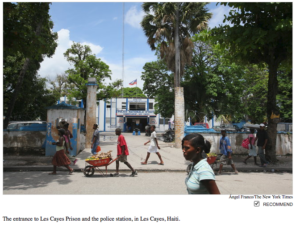 By DEBORAH SONTAG and WALT BOGDANICH

After officers had quelled the prison uprising in Les Cayes, Haiti, in January, Jacklin Charles, an unarmed detainee, was killed by a bullet to the head as he stood beside a tree in the courtyard. Several witnesses said that the chief of the antiriot police pulled the trigger.

Another detainee, Verlin Potty, was handcuffed and dragged into the dispensary, where officers beat him to death with their batons. The warden is said to have participated in the killing.

These two men were among at least 12 detainees killed by Haitian officers who opened fire “deliberately and without justification,” using “inappropriate, abusive and disproportionate force” against unarmed inmates who presented no immediate threat, according to an independent commission of inquiry report on the Jan. 19 uprising.

Most of the dead were summarily executed, the commission found, and at least 14 prisoners were wounded in what amounted to “grave violations of human rights.”

In a forcefully worded, detailed report, the commission said that it hoped for an official and public condemnation of the violations, which were initially covered up by the local authorities in Les Cayes. But the report, delivered to Prime Minister Jean-Max Bellerive on Sept. 2, was not released by the government.

The New York Times, whose investigation of the killings spurred the creation of the commission, obtained a copy from the prime minister’s office late on Wednesday after requesting it repeatedly over the past six weeks.

The report contains allegations of hidden bodies and rearranged cadavers, of a ringleader’s escape by a ladder that awaited him, of medical care denied wounded prisoners who lay dying in their cells, of threatened witnesses and common graves.

The commissioners said they found it difficult to determine precisely how many detainees were killed on Jan. 19 and by whom because of inadequate records, failure to preserve evidence and contradictory reports. They said the detainees’ accounts were more coherent, consistent and credible than those given by officials.

Although they could confirm only a dozen deaths, the commissioners said the death toll was undoubtedly higher, probably at least 15. Cemetery workers said they buried 12 indigent detainees and 3 others were claimed by their families for private burials. Other injured detainees were transferred to Port-au-Prince or released and some of them reportedly died, too.

The commission decided not to exhume the bodies because it was costly and probably too late.

Because the prison shootings had occurred one week after the earthquake that devastated Haiti, they originally went unnoticed. Soon after the killings, in fact, the prison warden, Sylvestre Larack, was quietly promoted to director of the national penitentiary in Port-au-Prince, which had emptied after the disaster but was starting to fill back up.

After The Times’s article published in May stirred outrage, the Haitian police took Mr. Larack into custody along with as many as 14 other police and prison officials from Les Cayes. Then, even as the commission began its work, the episode fell from the headlines until an uprising at the national penitentiary last Sunday.

Three inmates were killed Sunday at the penitentiary, two shot dead and one trampled during an escape attempt that took place during a visit by Swedish corrections officials. Inmates began pouring out of their cell blocks and the guards fired shotguns to push them back, according to Lars Nylen, director general of the Swedish prison and probation service. The visitors were briefly taken as shields by the inmates in an effort to stop the guards from shooting, he said.

During the melee, Mr. Larack, the former warden who is now a detainee himself, was “savagely beaten” by other inmates, according to a human rights advocate, Marie Yolene Gilles. Speaking on Radio Caraibes, Mr. Larack’s wife said that his attackers were transferred detainees from Les Cayes exacting revenge. She also said that her husband, like many of the detainees he used to oversee, had not yet seen a judge.

Overcrowded and dilapidated with poorly trained guards, Haitian prisons contain large numbers of inmates in prolonged pretrial detention, a reflection of the weakness of the judicial system. Lessons must be learned from the episodes in Les Cayes, the commission of inquiry said; that prison remains a tinderbox, even more understaffed than usual because of the guards arrested in relation to the Jan. 19 killings.

The commission, financed by the Haitian government and the United Nations, was composed of three foreign and two Haitian experts. It was led by Lt. Gen. Salvatore Carrara of Italy and Florence Elie, Haiti’s ombudsman.

The seeds for the uprising in Les Cayes were planted right after the earthquake when the detainees, scared to stay in their cells, clamored to sleep in the courtyard. Refused by the warden, they rebelled, throwing metal beds against the cell doors. Several were punished the next day by guards who beat them with batons, the commission said, condemning that mistreatment.

An escape plan was hatched, and on Jan. 19, several detainees attacked a guard who had opened their cell to empty their waste bucket. In the ensuing commotion, the guard fled. As the detainees set fire and vandalized the prison, United Nations officers helped surround the perimeter and provided tear gas, but took no part in the shooting, the commission found.

The commission did fault the United Nations officers for failing to seek medical help for the wounded they encountered after the shooting.

Mr. Larack claimed that officers, more than two dozen of them, entered the compound under a hail of bullets. But the commission determined, based on physical evidence and testimony, that the only shooting was done by the officers. The prisoners, unarmed, had obeyed orders to lie down.

The supposed ringleader had already escaped, without harm, although others were not as lucky; one detainee, shot from outside when he stuck his head through a hole in the prison wall, bled to death in his cell.