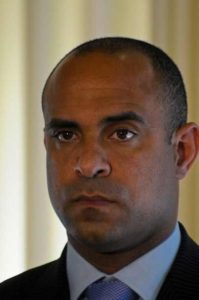 SECRETARY CLINTON: Well, good morning. It’s a great personal pleasure for me to have this opportunity to welcome the Prime Minister of Haiti Prime Minister Lamothe is someone who comes to this job on behalf of his country with a lot of private sector experience, a lot of commitment. And we are delighted to be working with you.

As some of you know, when I came into office as Secretary, I made Haiti a foreign policy priority and committed to working to change the way that we partnered with Haiti, moving from working in Haiti to working with Haiti. And in the 30 months – actually, more than that, because we started before the earthquake. And then once the earthquake happened, we scrambled to make sure we were being a good partner in helping Haiti recover from such devastation, but at the same time, working with them to help build a firm foundation for more prosperity and stability.

So today, the Prime Minister and I had a chance to take stock of what we have accomplished together, along with Haiti’s other international supporters, and to discuss the way forward. Haiti is working very hard to overcome extreme poverty, very, very high unemployment, the devastating natural disaster, and so much more. Some of these challenges existed before the earthquake, but they were exacerbated by the disaster. And while we want to highlight the progress we’ve made together, we cannot ignore what more lies ahead in terms of the challenges facing Haiti and its leaders. We have focused our work in four critical areas: agriculture, healthcare, infrastructure, and the rule of law.

Working with Haiti and its partners in the health sector, we have had to work hard and have succeeded in greatly reducing the fatality rate of the cholera epidemic from 9 percent to just over 1 percent. But we know that the only way to stop cholera long term is through improved water and sanitation. So we’re working with the Inter-American Development Bank and other donors on water, sanitation, and hygiene programs. And we’re working to upgrade health clinics in Haiti and to renovate the general hospital in Port-au-Prince in partnership with France.

In the infrastructure sector, we’ve removed more than two million cubic meters of rubble. We’ve worked with the Haitian Government to help return more than one million internally displaced persons to temporary shelters and safer homes. We’re also working hard with our Haitian partners to build up Haiti’s economy, building infrastructure that will expand and diversify the economic base.

In northern Haiti, the new Caracol Industrial Park is a landmark project that captures an integrated, sustainable approach to economic development. The park is drawing companies and will create more than 20,000 new jobs for Haitians. The first factory in the park has already begun operations; a second tenant has just signed up. Construction is underway on a new settlement in the area with more than 1,200 homes designed to withstand hurricanes and earthquakes, each with electricity, potable water, and flush sanitation.

And finally, in the rule of law sector the international community has provided critical support during Haiti’s elections for president and parliament – and we have the president of the senate here with us today – to ensure that the votes of the people of Haiti are counted. President Martelly and the Prime Minister and the parliament are demonstrating real leadership in making these reforms. The government has successfully stood up the superior judiciary council, making this government the first with all three branches functioning since 1987.

And today, the Prime Minister and I discussed the importance of the upcoming elections for local officials and the senate. And we talked about the continued need for police reform, border security, judicial reform, and the other important elements of stability that Haiti is committed to. Haitians have been in the lead at each step. This is something I believe in very strongly, that in the 21st century, country ownership, country priorities, country agenda setting, is absolutely essential. The United States can be helpful, but what’s really important is building the capacity of the Haitian Government and the Haitian society so they can have the means and the experience and the expertise to solve their own problems.

As I said to the Prime Minister, as I’ve said many times, Haitians are among the most creative, most vital, most hardworking people in the world. We have benefited so greatly from Haitian Americans in our country as many other countries have as well. Haiti has also, unfortunately, been the leading country in the world for brain drain. More Haitian college graduates have left Haiti, per capita, than any other country in the world. When you think of the talent that Haiti has produced that benefits us and others, what we want to do is make it possible for any bright, young, ambitious Haitian to stay home and to build his or her country. And we are excited by the progress we’re making. We are clear-eyed about the challenges we face, but we look forward to a future where every single Haitian has a chance to live up to his or her God-given potential in the country they are from and love.

So Prime Minister, personally, I want to thank you for what you are doing with your leadership to bring that day closer.

My office, my – the Prime Minister’s office, the President is deeply touched also by the appreciation. The respect that you give to Haitians is very important to us. The respect that we get from you, from your government, will go a long way and has. Of course, we’re celebrating 150 years of relationship when President Abraham Lincoln recognized the independence of Haiti and Haitians, and we just celebrated on the 12th of July, and we’re very happy about that and very proud of that.

The U.S. is doing a lot of good things in Haiti. The Northern Industrial Park is a development model that we want to replicate and that we want to support. The unemployment rate, as you well said, Madam Secretary, is at 52 percent. Fifty-two percent of the Haitian people are looking for jobs and are not finding the opportunities for the job, and when Haitians are given the opportunities, they succeed. The Northern Industrial Park will give, as you said, 20,000 jobs, direct jobs. But out of the direct jobs in Haiti, you get a (inaudible) of 10 to 20 percent. That means over 1 to 200,000 people will benefit from that park. That’s why it’s important to not only promote the park, but seek additional tenants and improve the capacity of that park to make it a big success. And once it’s inaugurated in October – and we’re looking forward to your visit – we assure that the rest of the world will see what us Haitians see, which is a success story.

We have – we’ve committed – the Haitian Government – the new Haitian Government is committed to improving the fight against corruption, which we’ve made as our number one priority – education, fight against extreme poverty. Too many Haitians are living in difficult circumstances with less than a dollar a day. We’re thinking about them, and we’re coming up with programs – social protection programs to assist them in the plight of a better life.

So I want to take this opportunity and the platform to thank also President Clinton for all the dedication and hard work and visits, and tripping in helicopters into the different parts to showcase what Haiti has that’s good, and to show that Haiti can be in the headlines for good things, not only bad things. And President Clinton has been a champion for that, and you, Madam Secretary, have also been on the forefront of promoting Haiti, and we thank you for that.

QUESTION: Good morning, Madam Secretary. I wanted to ask you about the violence today in Aleppo in Syria. It’s been described as combat, fierce fighting. This no longer seems to be just a case of the regime oppressing civilians. It seems to be all-out war. What realistically can be done at this moment to stop the fighting and bring about a political solution? Is that even possible right now considering the conditions there?

SECRETARY CLINTON: Well, first, we are well aware that the pace of events is accelerating inside Syria. Over the weekend, one of the opposition’s military leaders announced that they would be engaged in all out – an all-out effort to take over Aleppo, which, as you know, is the second largest city in Syria.

So what we are trying to do with our likeminded friends is to continue pressuring the regime, continue pushing for humanitarian relief, because the flow of refugees is increasing. We obviously would have preferred doing all of this under a UN umbrella. Unfortunately, those who are still supporting Assad undermined Security Council action. Russia and China exercised their third double veto. And so we are working outside of the UN Security Council to send a clear message of support for the opposition. We are, as I’ve announced before, providing nonlethal assistance. We have every reason to believe this will be important in terms of communication, principally, but also medical support. We are also sending a very clear message