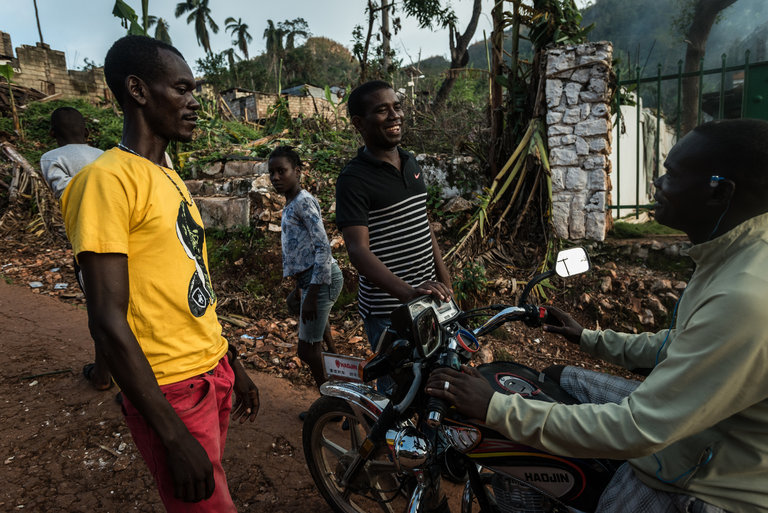 Guy Philippe, center, greeted villagers in his hometown of Pestel, Haiti, in October. Credit Meridith Kohut for The New York TimesMIAMI — Even by the standard of Haitian rebels, Guy Philippe was acting pretty confidently for a man on the D.E.A.’s list of wanted drug traffickers.

He publicly sauntered into a government office last week to pick up the certificate that confirmed his election to the Haitian Senate, a document he thought would offer the legal immunity he so craved. Later that day, he popped in unannounced at the Scoop FM radio station outside the capital, Port-au-Prince.

“We stopped the show, greeted him and allowed him to speak for 47 minutes,” said Gary Pierre Paul Charles, the station’s chief executive.

Then, after the interview ended, an undercover investigator pretended to offer Mr. Philippe a friendly hug, but instead pointed a pistol at his belly and handcuffed him. A phalanx of police officers surrounding the station fired warning shots that were heard on the air.

Before the plane that would bring him to the United States took off, Haitian National Police officers and American drug enforcement agents stopped to pose for cheery snapshots.

After failing time and again to bring Mr. Philippe into custody through the years, American officials had at last brought in one of their most-wanted Haitian suspects. But even though Mr. Philippe was once one of the most feared rebel leaders in recent Haitian history, he is also something of a populist hero, particularly in his native southwest region.

So the landmark arrest quickly led to chaos on Haiti’s streets, and is further complicating the already fraught relationship the country has with the United States.

Almost immediately, many members of Haiti’s parliament questioned the legality of expelling a man from his own country without so much as a hearing.

Then the violence started. In the southwestern city of Jérémie, furious mobs began throwing rocks, breaking windows and vowing to kill foreigners.

American missionaries were forced to flee their outposts and seek shelter at a United Nations compound. The United Nations Humanitarian Air Service removed two dozen people from the region, while church groups hired private planes to evacuate volunteers. The Red Cross followed the advice of the American Embassy and sheltered in place.

Fredrick Clerie, a 75-year-old Haitian-American who runs Hopestart International, an orphanage in the area, said he hid in a shower stall in a vain attempt to evade a horde of men crashing through his entrance. He later evacuated, along with his family and team of volunteers. 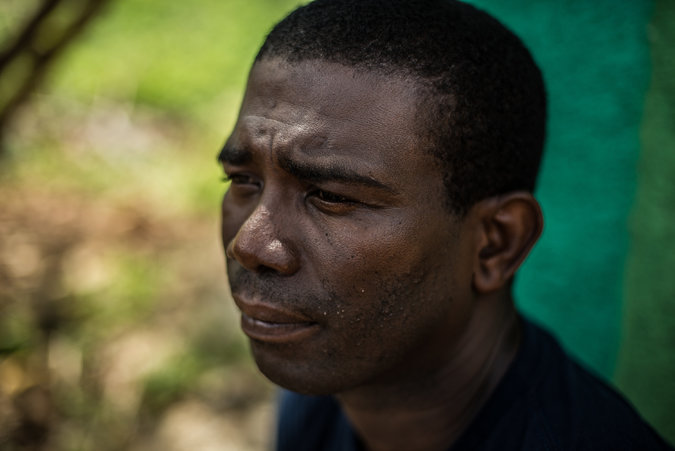 Mr. Philippe was extradited to the United States last week to face drug charges. Credit Meridith Kohut for The New York Times“In just a few minutes, they broke down the front gate and a crowd of maybe — I’m guessing, I didn’t count them — 250 men came running into the property yelling, ‘Kill white men!’” Mr. Clerie said in a telephone interview from his home in San Diego.

Mr. Clerie, who left Haiti in 1959 and did not return until after the 2010 earthquake called him for a life of community service, is light-skinned. The men stole his property, including his United States passport, and shouted that being Haitian and speaking Creole did not exempt him from this particular wrath.

“Clearly, with machetes that looked like they were recently sharpened waved in my face and people yelling ‘Kill white men!’ I thought, ‘That’s it,’” Mr. Clerie said. “I was praying for calm.”

Mark Stockeland, the executive director of Haiti Bible Mission, which is based in Jérémie and was also confronted by a pro-Philippe mob, said, “It’s not safe right now.”

He also added that Mr. Phillippe had “won over the people.”

Mr. Philippe, 48, is a former police and military official with a poor human rights record. In 2004, he staged an invasion of his home country in a successful quest to force out the president at the time, Jean-Bertrand Aristide.

A year after the rebellion, he was secretly indicted by a federal grand jury in the United States that accused him of running drugs from Colombia out of Haiti, and laundering money. Each time United States authorities were close to apprehending him, someone would tip Mr. Philippe off; a 2007 mission launched from Guantánamo Bay involving Black Hawk helicopters flopped.

Despite being a fugitive whose face was posted on the Drug Enforcement Administration’s website, Mr. Philippe had recently been elected to the Haitian Senate. In an October interview with The New York Times, he maintained that the Americans could find him if they wanted to, as he was in plain sight.

In his hometown, Pestel, he would draw dozens of well-wishers when he walked the streets. The town itself is isolated, hours from any city in a road riddled with boulders and difficult for law enforcement to access, particularly if lookouts were trying to stop them.

Gary Desrosiers, a deputy spokesman for the Haitian National Police, said the arrest operation involved thorough surveillance by the police, and insisted that no American agents were present at the arrest.

“This was an operation led by the Haitian police,” he said.

Mr. Philippe had not yet been sworn into the Senate, which gave authorities a small window to apprehend him before he would have immunity from prosecution.

“He had been doing tons of interviews, but he’s always done them by phone,” said Brian Concannon, the executive director of the Institute for Justice and Democracy in Haiti, an organization closely affiliated with Mr. Aristide. “This one he did live. He had security guards, but you can’t bring 20 guards into a radio station.” 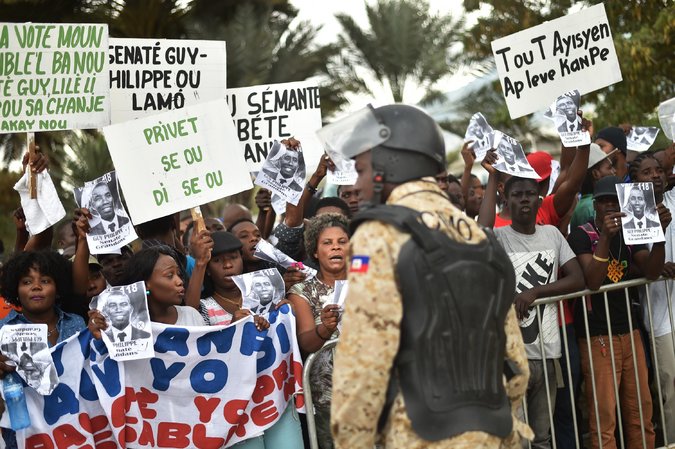 Supporters of Mr. Philippe demonstrated in front of the Haitian Parliament on Monday in Port-au-Prince. Credit Hector Retamal/Agence France-Presse — Getty ImagesMr. Philippe, he said, claimed to have transformed his army into a political party. Mr. Concannon said it was funded by illegal enterprises, which gave him the largess to be generous to a community that lacked basic government services and was vulnerable to influence by a larger-than-life character who shared his spoils.

“It was like a mafia in the good and bad sense of it, where he controlled the area around the city of Pestel,” he said. “With some of the money he got, he provided public services or advantages to his neighborhood. He was also getting a lot of government money through his machine and obviously apparently getting a good amount of money from trafficking and maybe other activities such as gambling.”

The D.E.A. referred questions about the case to the United States attorney’s office in Miami, which declined to comment other than to say that Mr. Philippe was being held without bond and would have a hearing on Friday.

Mr. Philippe said, “I was kidnapped for my political beliefs,” in a statement to The New York Times released this week through his lawyer in Miami.

“All I can say is he is innocent,” the lawyer, Richard Dansoh, said. “He is very enthusiastic about having his day in court. He was asking me, ‘Is he going to have an open trial?’ I said, ‘Yes, indeed.’ He wants to walk out with his dignity intact.”

Members of the Haitian Parliament were furious about the arrest, which, although not unusual, took place without a hearing before a judge. Among the questions some legislators have is whether such an expulsion violates the Haitian Constitution.

Although the constitution prohibits the extradition of Haitian citizens, the government has “willingly surrendered” Haitians and other indicted suspects to the United States, according to a 2015 State Department report.

The report said the two nations entered a bilateral extradition treaty in 1905. In 1997, Secretary of State Madeleine Albright negotiated a drug-trafficking accord with President René Préval of Haiti, and since then suspects have been willingly surrendered to the United States. Critics say the accord allows the United States to operate only in Haitian air and seas — not on its land.

“As a congressman, we are going to talk about that, discuss it and see what we can do,” said Sorel Jacinthe, a senator from the Grand’Anse, the region Mr. Philippe was also to represent.

Mr. Jacinthe said his colleague is similar to other criminal figures in countries such as Colombia, where people like Pablo Escobar were wanted by the police but adored by their communities.

“He is their congressman,” Mr. Jacinthe said. “They like him.”

Mayor Evil Lavilette of Pestel said Mr. Philippe’s supporters planned a march in the village on Thursday and a protest in Miami on Friday. Mr. Philippe, he said, is so popular because he always made development of the region his priority.

“Guy Philippe is a leader, and as a leader he will bring their claims to a higher level,” he said. “The population did his campaign for him.”