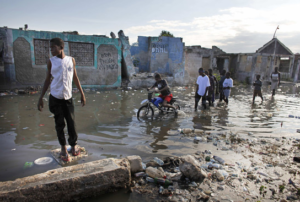 PORT-AU-PRINCE, Haiti— Heavy rains pelted Haiti’s capital this week ahead of the rainy season, giving the hundreds of thousands of people left homeless by last month’s earthquake a sense of the misery ahead.

Health-care experts say conditions in the crowded tent communities that sprang up after the Jan. 12 disaster are exacerbating cases of diarrhea, pneumonia and malaria.

People cross a flooded street in the Cité-Soleil neighborhood of Haiti’s capital, Port-au-Prince, this week. Heavy rain fell on the city, taking a toll on tent camps set up after the quake.

When the rainy season begins in May, those types of illnesses will grow more quickly. Weather is a fresh concern, joining disease, security, food, overcrowding and other woes for the makeshift communities.

“The big race now is to get ready for the rainy season and provide adequate shelter and sanitation,” said Ronald Waldman, U.S. government medical emergency coordinator who has been stationed in Port-au-Prince since shortly after the earthquake.

An estimated 300,000 families lost their homes in Port-au-Prince, throwing about a million people on the streets.

Even before the quake, the rainy season was something to be feared in Haiti’s crowded capital, where water rushes down deforested mountains and through trash-filled ravines, creating often deadly torrents.

Particularly vulnerable is a tent community with 6,000 people on the grounds of the Gheskio clinic, a world-renowned AIDS center, near the slums a half a mile from the national palace. The property is below sea level, so to protect itself from rain, the clinic itself constructed its own buildings on platforms.

“You can put a tarp over people, but when the rain comes, all those tents out there will be completely flooded, the ground will be mud, their belongings destroyed,” says Jean “Bill” Pape, the director of Gheskio. He is trying to have the tents relocated up a hill nearby before the rainy season, which runs through September.

Warren Johnson, a Gheskio co-founder who is director of the Center for Global Health at Weill Cornell Medical College, said the refugee camp is becoming more entrenched. The system of using street vendors to provide free food was abandoned when thugs in the camp threatened the vendors and demanded money. There is no security.

Dr. Waldman said the crowding, poor sanitation and exposure to the elements could ultimately foster diseases with epidemic potentials such as typhoid.

Some of the tent camps are so crowded that smaller groups of people are moving out, setting up smaller groups of tents further away from the city center. This has complicated the delivery of aid because the U.S. military and other organizations can’t keep track of where the people are.

Near the capital’s destroyed presidential palace, Abraham Ansur’s family of five, including three children, sleep on the curb by a bustling street. For each of the past three nights, he and his wife have woken up to stand under an umbrella during the rain, taking turns holding the children and trying to keep them dry.

On Friday, Mr. Ansur hammered together pieces of plywood he recovered from his house after it collapsed. His plan: build a square wooden frame that he can then use to hang a tarpaulin around it. He doesn’t have a tarp, but hopes to secure one from an aid agency soon.

“I can handle the rain, but I feel bad for my children,” said Mr. Ansur, an unemployed 29-year-old.

Weeks after the quake, Haiti’s government announced plans to build formal tent cities in Croix des Bouquets, about a 30-minute drive north of Port-au-Prince. But this week, the town showed no signs of the tent cities, just a girls’ soccer team playing on a dusty field.

A number of preventive interventions are under way, such as a vaccination campaign by the Haitian government.

The U.S. Centers for Disease Control and Prevention also is compiling an epidemiology report that will track occurrences of unusual events in the health field and regularly publish alerts of emerging trends.

“As we move from one season to the other, we fully expect an increase of diarrhea and malaria,” Dr. Waldman says. “That’s what always happens in the rainy season.”

He noted that many Haitians moved as groups with their neighborhoods to camps, rather than remaining isolated on their own properties as neighbors, friends and families opted to leave. Sometimes community leaders organized the move into the tent community.

“There is a strong sense of social cohesion in Haiti,” he says. “So a lot of the encampments are replications of their neighborhoods and congregations.”

Some of the capital’s informal tent cities look ever more permanent.In most of them, there are informal services springing up: Barbers clip hair, bootleggers sell moonshine, and women try to hold impromptu classes for children.

At the soccer field in Pétionville, residents gathered together to create a makeshift police force, using young men as volunteers. “We have heard gangs are taking over in some of the camps. And my family is afraid,” said Jean Flitznar, 29.

History has referred to the

Four Horsemen of the Apocalypse…….Pestilence, War, Famine, and Death

Haiti has already met at least two and will meet another soon as pestilence takes root in the form of cholera, TB, Tetanus…even the common cold…morphing into the Flue, pneumonia and death. We are also experiencing a WAR of sorts as Preval pits his personal interests against those of the Haitian people. The Cynic Preval is using the Haitian People’s own elements against them in his bold attempt to retain the presidency past its term end in February, 2011.