CARACAS (Reuters) – Huge queues at supermarkets and shortages of basic products have become the norm in Venezuela over the last year – and the most needy are increasingly at the sharp edge.

Workers at soup kitchens for the homeless and hungry face an ever-more difficult task to find rice, lentils, flour and other staples to provide a free daily hot meal.

“I queue for hours every day because you can only get one thing one day, another the next,” said Fernanda Bolivar, 54, who has worked for 11 years at the church-supported “Mother Teresa” soup kitchen in a back-street of downtown Caracas.

“The situation’s got terrible in the last year,” she said, in a dingy kitchen at the center named for the Roman Catholic nun who helped the poor and dying in India. 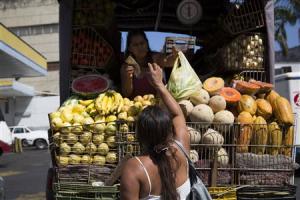 Fernanda Bolivar, 54, buys vegetables from a street vendor close to the Mother Teresa of Calcutta ea …

Inspired to help because of her own experience of going hungry a decade ago, Bolivar cooks lunch every day for the 50 or so people who sit on long concrete tables inside the dimly-lit refuge that often gets flooded during the rainy season.

To get the ingredients, like many other Venezuelan shoppers, she rises at 4 a.m. to start queuing – normally for several hours – at a supermarket nearby with hundreds of others. A number marking her place in the queues is scrawled on her hand.

Opponents of President Nicolas Maduro’s government say the queues are a national embarrassment and symbol of failed socialist economics similar to the old Soviet Union.

But officials say businessmen are deliberately hoarding products as part of an “economic war” against him. They point to popular social welfare programs, and a halving of poverty levels since Maduro’s predecessor Hugo Chavez came to power in 1999, as evidence that Venezuela’s poor are better cared for than ever.

The government this month began an ID system that tracks shoppers’ purchases at subsidized prices in state-run supermarkets. Officials say that will thwart hoarders and guarantee an equitable distribution of cheap food to those who need it, but critics are decrying it as a Cuban-style ration card that illustrates the shocking state of the economy. 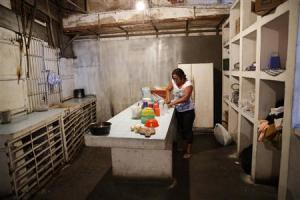 Fernanda Bolivar, 54, prepares food in the kitchen of the Mother Teresa of Calcutta eating center in …

Venezuela’s government runs a network of shelters and feeding centers known as the Negra Hipolita mission, which operate alongside church institutions like the Mother Teresa center under a bridge in the San Martin district of Caracas.

There on a recent day, some of those eating a free lentil soup grumbled that there was no meat – but still gratefully wolfed down several bowls of food each.

“I’ve been coming every day for years, I’m one of the family here,” said jobless Vladimir Garcia, 56, taking his time over a large bowl of soup.

Garcia has been helping organizer Bolivar to queue for the center’s food. “Maybe socialism has done a lot for Venezuela, but we never had these huge long lines for everything before. Nor this scarcity of food products,” he said.

“It’s madness for such a rich nation.”