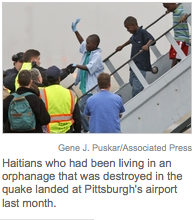 PITTSBURGH — It was widely billed as the first uplifting story in the aftermath of the earthquake that devastated Haiti’s capital: two young American women rescued 54 Haitian orphans in an airlift organized by Gov. Edward G. Rendell of Pennsylvania and supported by top Obama administration officials.

More than a month later, Governor Rendell is enjoying a reprieve from months of negative budget news coverage, the local church that sponsors the American women’s work with orphans is reportedly receiving record donations and 42 of the orphans are in the care of American families who had applied to adopt them.

But for 12 of the children, last month’s airlift transported them from one uncertain predicament to another. As it turns out, those children — between 11 months and 10 years old — were not in the process of being adopted, might not all even be orphans and are living in a juvenile care center here while the authorities determine whether they have relatives in Haiti who are able to take care of them.

The details of the children’s departure — and what that could mean for relations between the United States and the Haitian government, which later detained 10 Americans for trying to take children out of the country without authorization — remain unclear.

Ambassador Raymond Joseph, Haiti’s envoy to the United States, said he refused to approve Governor Rendell’s request to remove children from the country who were not already in the adoption pipeline. But an aide to Prime Minister Jean-Max Bellerive said the Haitian government accepted assurances from Mr. Rendell and American officials that the children would be well cared for in the United States. The adviser, Alice Blanchet, said of the governor, “I have no reason to second guess his intentions.”

Senior Obama administration officials acknowledged in interviews that the lines of authority were fuzzy in Haiti on the day of the rescue mission, Jan. 18. And they said that American officials concerned about the well-being of the children had allowed Mr. Rendell to remove them from Haiti even though they had not received clear authorization to travel by the Haitian government and were not in the process of being adopted by American families, as required by a United States humanitarian parole policy announced the day Mr. Rendell landed in Haiti.

“This wasn’t supposed to happen this way,” said one senior State Department official, who like others asked not to be identified in order to speak candidly about the episode. “But it’s not as if it was a normal day in Haiti, either.”

When asked what he had done to persuade the administration to grant an exception for the 12 children, Mr. Rendell said in a phone interview, “I don’t know how it happened, but I didn’t ask a lot of questions, and if you had seen the faces of those children as we loaded them onto the airplane, you wouldn’t have asked a lot of questions, either.”

Several administration officials who spoke at length about the rescue effort suggested that they were led by their hearts. There were two American women and 54 small children living in precarious conditions without reliable access to food, water and sanitation. Telephone lines were down. And nearly all government offices had been flattened.

Matt Chandler, a spokesman at the Department of Homeland Security, said: “This was an extraordinary situation. There wasn’t the benefit of time. And there was a gut decision that the administration believed was in the best interests of the children.”

Diane Paul, an expert on natural disasters and human rights at the Brookings Institution, pointed out that most children living in Haitian orphanages had families who gave them up during hard economic times, but ultimately hoped to recover them. “How do we know someone in Haiti is not looking for them?” she asked, referring to the 12 children.

For now, they are living in a sweeping 5,000-square-foot cottage at the Holy Family Institute just outside Pittsburgh. The institute’s snow-covered playground and indoor swimming pool make it seem a world away from the squalid streets of Port-au-Prince, Haiti’s capital. The director, Linda Yankoski, said leaders of Pittsburgh’s small Haitian community were volunteering to cook for and work with the children. And she said the children did not seem traumatized by their transition.

In coming days, officials said, Red Cross workers plan to interview the children and establish if they have families in Haiti.

The Pennsylvania governor, a Democrat, said he got involved with the rescue effort after learning about two Pittsburgh-area women — Jamie and Ali McMutrie — who were caring for dozens of children outside a Port-au-Prince orphanage that had been damaged in the earthquake.

From their camp amid the rubble, the young and telegenic McMutrie sisters started a campaign on Facebook and Twitter that captured the attention of people across Pennsylvania. Their pleas for help became part of a national outcry by families seeking to adopt Haitian children that led the Obama administration to take the unusual step of offering humanitarian parole to hundreds of orphans.

Most of the 54 children in the McMutrie sisters’ care were eligible for parole, the authorities said. But the women refused to leave Haiti without the dozen children who were not.

That is where Mr. Rendell’s high-level political connections became most important. Upon landing at the Port-au-Prince airport, he said, he used a cellphone and a BlackBerry that faded in and out of service to press for authorization to take all the children to the United States.

He and Representative Jason Altmire, another Democrat who was also participating in the mission, began contacting everyone they thought could help back in Washington, including Rahm Emanuel, President Obama’s chief of staff, Huma M. Abedin, a senior aide to Secretary of State Hillary Rodham Clinton, and Pennsylvania’s two senators, Arlen Specter and Bob Casey, both Democrats.

Denis McDonough, the president’s deputy national security adviser, who happened to be at the Port-au-Prince airport trying to fly home that day, was also enlisted to help.

Mr. Altmire recalled getting one or two more children approved with nearly every phone call. Mr. McDonough got a message on his BlackBerry granting the children authority to come to the United States. And five and a half emotionally exhilarating hours later, most of the group was on its way to Pittsburgh.

One little girl, named Emma, had gotten left behind in the shuffle and was brought to Pittsburgh the next day.

Since then, Mr. Altmire said, no one involved with the effort had looked back. He recalled one little boy who clutched a photo of his adoptive parents.

“That put the whole thing in perspective for me,” Mr. Altmire said. “I knew all our efforts were worth it.”

“But an aide to Prime Minister Jean-Max Bellerive said the Haitian government accepted assurances from Mr. Rendell and American officials that the children would be well cared for in the United States.”

Here we have Bellerive launching a bunch of kids off into the unknow while, on the other hand, without any knowledge of the facts, accuse 10 Baptist missionaries of kidnapping 33 small childre. The missionaries were faced with a simple, and basic situation.

They could stay, and starve with the kids.

They could flee and save themselves, leaving the children behind, or,

They could take the children with them to a temporary sanctuary at an orphanage in the Dominican Republic.

Being Christians, with a conscience, they took the kids to safety, even as Prime Minister Jean-Max Bellerive was following the same road into the Dominican Republic. Prime Minister Jean-Max Bellerive did not take any children to safety. He did try to take $8,000,000 in fresh $100 American bills, snugly packed in an aluminum Zero-Halliburton case – so loved by drug traffickers – to safety in his Dominican bank account.

Unfortunately, the missionaries were arrested.

Fortunately, Jean-Max Bellerive was arrested although this was carefully hidden from public view, and now some suggest Preval should step down….leaving Bellerive in control.

Bellerive is  a pig.

The fact that he is homosexual and depends on a small cadre of like-minded – but politically disconnected –  young boys around him for support and advice, he is not the man/woman to lead Haiti in this desperate time of need. Bellerive is also a 20 year member of the Dominican Republic’s secret service. You cannot serve two Gods. He must be removed from office and replaced with a Haitian committed to the Nation’s well-being. Loyalty must be to the Haitian people, not Dominican President Fernandez.