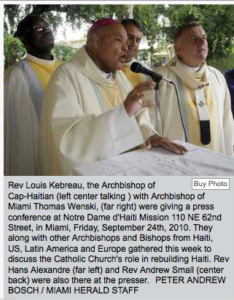 Catholic leaders in Miami unveiled long-term plans on Friday to help rebuild the Catholic Church and its shattered infrastructure in Haiti after the powerful institution took a massive drubbing in the January earthquake.

“They are faced with incredible difficulties,” Archbishop Thomas Wenski said at a news conference at Miami’s Notre Dame d’Haiti just before a special evening mass attended by bishops from Haiti and beyond. “At the same time . . . the bishops and clergies have tremendous hope.”

The announcement underscores how the Catholic Church around the world stepped forward to help Haiti after the Jan. 12 quake. Catholic officials recently met for several days in Miami and Port-au-Prince to figure out ways to rebuild the church.

Catholic leaders at the Miami meeting came from throughout Latin America and also France and Germany.

The reconstruction effort will take shape as the Program for the Reconstruction of the Church in Haiti, or by the acronym PROCHE, and seeks to establish a commission that studies and approves parish projects while ensuring that the building “process is as efficient as possible, as transparent as possible,” said Wenski, who has traveled to Haiti several times since becoming archbishop of Miami.

The program also will make sure that building plans follow construction standards and appropriate codes. Both Haitian and international members would be at the helm.

The plan is scheduled to go before the United States Conference of Catholic Bishops for approval in November.

In a deeply faithful country where three out of five people are Catholic and most others are Protestant, the church took a huge hit in the Jan. 12 tremor. With damage estimates running in the tens of millions of dollars, the church saw at least 60 of its churches — including the Notre Dame Cathedral in downtown Port-au-Prince — collapse. It’s estimated that seven out of every 10 Catholic churches were lost.

The quake claimed an estimated 300,000 lives. Among them were more than 100 nuns, priests, and top church leaders, including the archbishop and vicar general of Port-au-Prince. Almost nine months later, the scale of destruction is still evident. Mass is held under tarps at some of the churches.

Since then, the church, Caritas Internationalis and other Catholic partners say they have raised approximately $300 million. Caritas Haiti and others say they used the money to distribute food to more than 900,000 people and also provide water, sanitation, and shelter materials to some of the 1.5 million Haitians made homeless in the quake.

The church isn’t just focused on reconstruction. It also plans to reinstate a program that would help train priests. Church officials are trying to purchase a 650-acre stretch of land northeast of Port-au-Prince. The site would house two seminaries, housing, an elementary school and a parish.