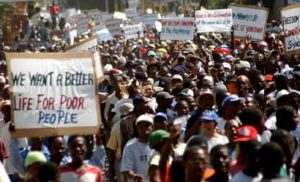 It has been eight months since the 7.0 earthquake devastated Haiti, but to look at the conditions on the ground, you would think it happened only a few weeks ago.  There has been pitifully little progress.  More than 1.7 million Haitians sleep under tarps — not tents — without regular access to food or healthcare (see picture below).  Initial estimates say that about 30,000-35,000 people have died since the quake due to a lack of access to medical or humanitarian assistance.  The country is operating under a patchwork of aid programs with no direction or coordination from the Haitian Government — or the international community.

The United States has played a leading role in recovery efforts through private donations, public commitments on aid and volunteers, but has not played a leading role in coordinating the international community.  The people of the US donated $1.1 billion, and the government committed another $2.9 billion for a total of $4 billion, but there is little evidence of that money’s impact on the ground.

Therefore, in order to draw attention to the grim situation in Haiti, Haitian Diaspora in the US should convene in Washington, DC on November 12 (post-US elections and pre-Haitian elections) to organize a rally to draw attention to the lack of progress and substandard conditions in Haiti.  Additionally, this would be an excellent opportunity to also highlight the 55,000 Haitians that applied for TPS immigration status, who are still pending approval — and facing a seriously long wait (while Cubans have preferential channels).  And, an opportunity to call for free and fair elections in Haiti on November 28.

November 12 is a Friday so you would need to arrive in DC by Friday morning.  We can talk about organizing buses from your locality.  If traveling by bus, depending on your location, you would need to depart on Thursday mid-morning and you could return on Friday evening or Saturday morning.

This is just a concept at this point — and a tentative proposal to help our countrymen who continue to languish in more than 1,370 makeshift and ad hoc camps.  There are more than two million Haitians in the United States.  If we join together, we can generate some high level press coverage to keep the plight of our countrymen at the top of the agenda.

I look forward to your thoughts an opinions as well as brainstorming ideas on how and where to organize this rally.  If you would like to participate in the organizing committee or organize a committee in your city or state, please contact me at (202) 256-6026.

“In unity there is strength. L’union fait la force”