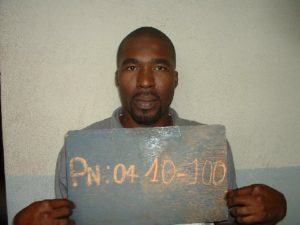 PRIME MINISTER LAMOTHE FACES THE DISRUPTIVE ACTIONS OF  20 ARISTIDE/LAVALAS-LEANING DEPUTIES WHEN HE APPEARS TO OUTLINE PAST PERFORMANCE AND FUTURE PLANS. THESE PRI DEPUTIES ARE LEAD BY THE CONVICTED CRIMINAL – ILLEGALLY ELECTED – ARNEL BELIZAIRE

January 11
During the last part of 2012 a group of Aristide supporting Deputies drove their vehicles into the Primature parking area and stayed there, for several hours, honking their car horns. These fools were led by Deputy  Arnel  Belizaire, a man who was convicted of a crime, before he was elected, and should have been barred as a candidate.  Aristide clone, President Rene Preval’s controlled CEP passed his papers, allowing an illegal candidate into the electoral process and then fixed things so he took a seat in Haiti’s parliament. Since then he has created many problems.

Democracy is challenged with his leadership of a destabilizing Aristide/Lavalas-leaning sector of the Lower House.

The PRI representatives say they refuse to meet with him and plan to disrupt the presentation by making a wall of noise, during the session. If the PRI does not want to listen, they should abstain, not attend, and let their associates hear what Prime Minister Lamothe has to say. Unfortunately, the PRI does not march to the tune of Democracy and believes in their Dictatorship of Interruption.

This PRI stupidity does nothing for Haiti and its desperate 9,000,000 people who never see their elected representatives after the elections. Haiti has never known Democracy and it is getting no lessons at the moment as these DISRUPTIVE DEPUTIES take cash payments from Aristide to do his work for him.

Haiti, and Prime Minister Lamothe,  need all the support they can get. It is not in Haiti’s best interests, or those of the International Community, to  see the Lamothe government derailed by those who offer no useful alternative other than the infliction of violence, instability, economic disaster, starvation  and chaos.

Lavalas thrives on chaos and the destruction of any infrastructure.

And now, on the anniversary of that horrendous earthquake of January 12, 2010,  when we lost over 300,000 people, injured countless others, destroyed homes of many, many people, fractured what little infrastructure existed and left the Nation with an near impossible challenge to climb from the Pit…. Belizaire, and his Lavalas-oriented  PRI (20 members) partners    in crime,  want to shove Haiti back into the abyss for selfish, immoral purposes.

To suggest changing the government – yet again – at this moment,  is similar to a concept in which some drunk passengers demand replacement of their  captain of a Boeing 747, a half mile from touchdown, in bad weather… DISASTER MUST FOLLOW!

Unfortunately, Haiti has no “grassroots politics” otherwise the electorate would march on the 20 deputy’s homes to demand that they act in accordance with the desires of the people who elected them.

Time to cancel visas for those who would effectively block the Democratic process in Haiti.  The American Immigration Act has sections that allows this. After all, these disruptive Deputies threaten billions of American input to Haiti.