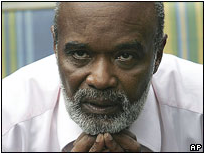 PORT-AU-PRINCE, Haiti — The U.S. Embassy says a kidnapped person was among four U.S. citizens killed in Haiti since the Jan. 12 earthquake.
The U.S. State Department expanded its travel warning for Haiti on Monday to say that dangers of killings and kidnappings persist, and “some kidnap victims have been killed, shot, sexually assaulted or physically abused.”

Embassy spokeswoman Mari Tolliver says “one of the deceased American citizens was the victim of a kidnapping.” She gave no details and police spokesman Gary Desrosiers said he knows nothing about the case.

2 thoughts on “PREVAL SENDS ANOTHER MESSAGE American was kidnapped, killed in Haiti”