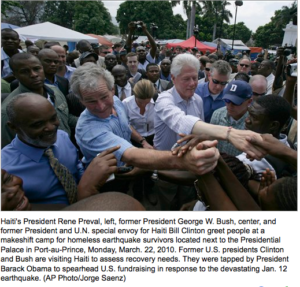 PORT-AU-PRINCE, Haiti — Former Presidents George W. Bush and Bill Clinton clasped hands with residents of one of Haiti’s massive tent cities Monday on a tour of its quake-devastated capital — a visit intended to remind donors of the immense needs facing the recovery effort.

The two former leaders, who were tapped by President Barack Obama to spearhead U.S. fundraising for the crisis, made their first joint visit to Haiti. They spotlighted the dramatic need for help ahead of a critical March 31 U.N. donors conference in New York where Haitian officials will ask for $11.5 billion in reconstruction help.

At a news conference with President Rene Preval on the grounds of the collapsed national palace, Bush said he was struck by the devastation caused by the Jan. 12 earthquake.

“It’s one thing to see it on TV, it’s another to see it firsthand,” said Bush, who was making his first visit to Haiti. “Hopefully our visit will remind people that Haiti needs help.”

Clinton and Bush later greeted quake survivors camped on the Champ de Mars, the national mall filled with 60,000 homeless people. Secret Service agents and Haitian police surrounded the men as they waded into a fenced-in section of the mall where dozens of families have pitched blue, orange and silver tarps.

While many of the homeless welcomed the visit as a sign that the U.S. would continue to supply aid, some said they were disappointed the presidents did not bring anything more tangible.

“The visit is like no visit at all. They walked inside, it’s to show off,” said Rene Pierre, a 35-year-old homeless man.

About 100 protesters burned tires and an American flag outside the national palace to demand the return of ousted President Jean-Bertrand Aristide, who was flown from Haiti aboard a U.S. plane during Bush’s presidency and now lives in South African exile.

Clinton and Bush visited the country as it struggles to feed and shelter victims of the magnitude-7 quake, which killed an estimated 230,000 people. Another 1.3 million quake survivors are homeless, with many living in camps prone to dangerous flooding in the April rainy season.

The former presidents also visited the Maxima SA woodworking plant where manager Evelien Degier, a native of the Netherlands, said they can build houses for $2,000. She said she hopes the presidents help direct investment to companies like hers that employ Haitians as part of the reconstruction effort.

“It’s wonderful to have the handouts and the food,” she said. “But now people need to go back to work to real life to earn real money.”

The chairman of Haiti’s chamber of commerce, Reginald Boulos, said Monday that Clinton and Haitian Prime Minister Jean-Max Bellerive will co-chair a task force overseeing the large amounts of international aid expected to pour in next month.

Clinton said he had not been formally offered the position but was open to helping in any way. He endorsed creating an independent agency to oversee aid as well as a Web site to track money — ideas he said helped avoid corruption in Indonesia after the 2006 tsunami.

Named U.N. special envoy to Haiti last year, Clinton said the former presidents hoped to get all the aid agencies and the Haitian government working together to make the most of the huge global outpouring of support.

“The most important thing in the short run is to coordinate what the NGOs do with the long-term plans that the Haitian government has. They can’t be a self-sufficient country unless we both are transparent in this aid and build the capacity of the government,” he said.

Aid was already being announced on Monday.

The Inter-American Development Bank announced it had agreed to forgive its $479 million share of Haiti’s $1.2 billion in foreign debt while offering $2 billion in grants over the next 10 years. The European Union said it will donate euro1 billion ($1.36 billion) in development aid to Haiti in the years ahead.

Venezuelan President Hugo Chavez has also announced he would cancel Haiti’s debt to his country, which the IMF had listed at more than $200 million.

The nonprofit Clinton Bush Haiti Fund has raised $37 million from 220,000 individuals including Hollywood actor Leonardo DiCaprio, who gave $1 million, and Obama, who among other donations gave $200,000 of his Nobel Peace Prize.

About $4 million has gone to such organizations as Habitat for Humanity, the University of Miami/Project Medishare mobile hospital in Port-au-Prince and the U.S. branch of the Irish charity Concern Worldwide. The rest has yet to be allocated.

COMMENT: HAITIAN-TRUTH.ORG
Remember what I said a few days ago.
If anyone demonstrated when Bush/Clinton arrived, it was Preval who paid them, not Aristide.
And so, as Bush/Clinton toured a couple of hundred tire burning demonstrators also torched an American flag and demanded Aristide’s return.
Watch my lips.
I am definitely not an Aristide fan, nor have I ever been. But I am a student of the Haitian political games, with very good contacts in all sectors… and the facts were there for all to see. The demonstrators were paid by Preval to embarrass Bush/Clinton…but also to embarrass Aristide by making it appear that he wanted to spoil the Bush/Clinton visit.
People are starving and $10.00 American would buy some food….but all Preval could get on the street was a couple of hundred people.
THERE IS A MESSAGE HERE.
THE PEOPLE HATE PREVAL
IT IS TIME FOR HIM TO GO!!!!