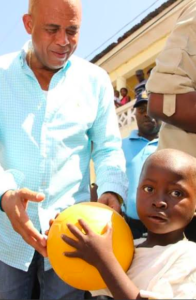 President Martelly visited Pilate to distribute One World Futbols to the soccer community there. These indestructible soccer balls are the basis of a Chevrolet-sponsored program that see them distributed throughout the Third World.  Soccer is seen as a key to creating teamwork, and cooperation among young people, a foundation that will carry on into their later life.

Overall coordination of One World Futbol distribution in Haiti is managed by Carolle Tranchant’s Haitian Children’s Fund. She has been President of the charity since 1994.