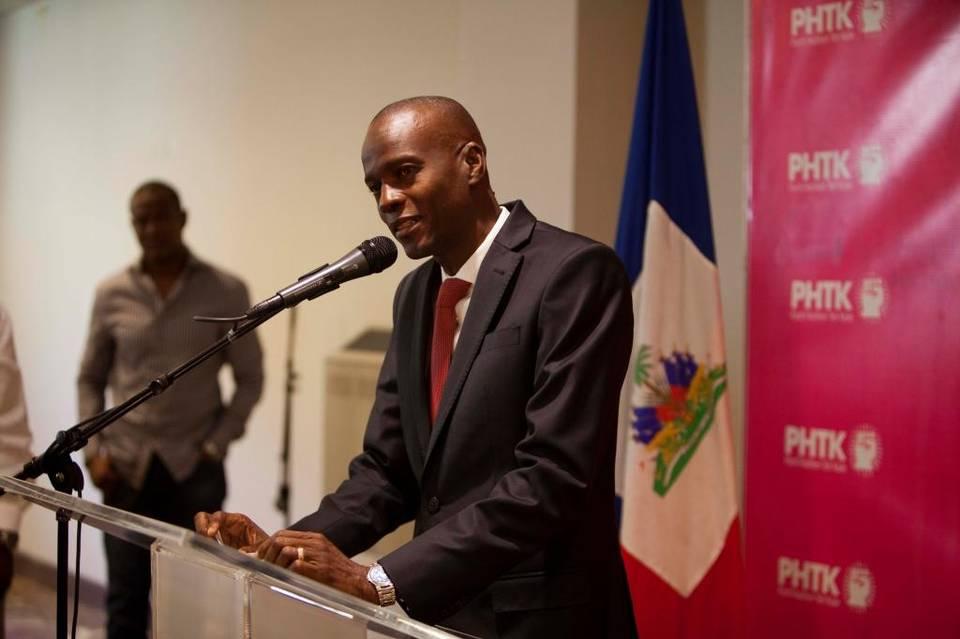 Presidential candidate Jovenel Moise, from the PHTK party, speaks during a press conference in Port-au-Prince, Haiti, Monday, Jan. 4, 2016. A commission that evaluated Haiti’s contested presidential election said Monday that the large majority of the irregularities it found in first-round voting were due to widespread ineptitude by poll workers. Dieu Nalio Chery AP

The head of Haiti’s Provisional Electoral Council says it’s impossible to organize a presidential runoff in time for the country to meet a Feb. 7 constitutionally imposed deadline for the handover of power from one elected president to another.

Pierre-Louis Opont made the revelation Monday in a letter to President Michel Martelly, who had been told that Jan. 17 is the latest date a second round could be held in time to meet the constitutional deadline. The letter was issued hours after a five-member elections evaluation commission issued a damning report discrediting the council and raising questions about the integrity of the much criticized Oct. 25 presidential and legislative vote.

“Twelve days of preparation will not be sufficient to complete the process prior to the elections,” Opont wrote while noting that the council, known as the CEP, had yet to receive the report of the “Independent Electoral Evaluation Commission formed by the executive.”

Opont’s change of heart on the elections came four days after he informed Martelly that the CEP was ready to hold the presidential runoff on Jan. 17. The news prompted Martelly to announce during a Jan. 1 Haiti independence day commemoration in the city of Gonaïves that in the coming days, he would publish “a decree inviting the people to vote Sunday, January 17, 2016.”

We are ready to sit down and talk. Jovenel Moïse, government-backed presidential candidate

On Monday, his handpicked successor, Jovenel Moïse, continued to outline his priorities for the country should he be elected, while noting that “we are ready to sit down and talk” with Jude Célestin, the opponent he is supposed to meet in the presidential runoff.

But instead of preparing its 5.8 million voters to head to a second round, Haiti on Monday appeared to be moving closer to a transitional government as the political situation continued to unravel. That reality, say sources, has prompted a visit by U.S. Ambassador Thomas Shannon, counselor to U.S. Secretary of State John Kerry. Shannon will be tasked with not just trying to salvage an electoral process that is being clouded by doubt and ongoing protests, but also the installation of the 50th Legislature.

Weeks after final legislative results were announced by the CEP, Martelly has yet to publish them in the official gazette. Meanwhile, the president of the Senate has warned that the law prohibits the seating of the newly elected lawmakers until the entire electoral process is completed. Haiti’s parliament dissolved in January 2015 amid a political crisis and overdue parliamentary elections, forcing Martelly to rule by decree.

With no newly elected president on the horizon and 35 days left before the end of Martelly’s five-year presidential term, there’s building speculation in Haiti about the fate of the presidency. The question is whether Prime Minister Evans Paul will be allowed to stay after Martelly’s departure to organize elections within three months, or would Martelly remain until May 14 — the actual date he took office — even though the amended constitution doesn’t authorize an extension of his mandate?

Scheduled for Dec. 27, the presidential and legislative runoffs as well as local elections were postponed by the CEP until further notice. The decision was announced just days before the balloting amid the ongoing electoral crisis triggered by the lack of confidence in the elections and the CEP. The postponement of the runoff prompted both the United States and United Nations to urge Haitians to work out their differences in order to inaugurate a new president by Feb. 7.

On Tuesday, seven foreign diplomats representing the Core Group of countries supporting Haiti issued a statement acknowledged the “efforts aimed at enhancing the credibility and transparency of the ongoing electoral process and ensuring a level playing field” with the commission’s report. Diplomats, however, reiterated their call for “state institutions and political actors alike to take all steps necessary to ensure a peaceful transfer of power to a newly elected President by the constitutionally mandated date of 7 February.”

Official results give government-backed candidate Moïse 32.8 percent of the votes compared to Célestin, the former head of the state construction agency, with 25 percent. Célestin and the opposition have refused to recognize the results, alleging massive fraud in favor of Moïse. Moïse has denied the allegations, saying that he knows “500,000 people voted” him.

He also dismissed Opont’s position over the fate of the runoffs, saying he prefers to wait on the executive’s response given that there are two other Sundays in January before Martelly leaves office.

Adding to the country’s woes, an alliance of eight opposition presidential candidates, responding to the commission’s elections report, on Monday reiterated its call for the creation of a provisional government to complete the election process and the resignation of the CEP.

Though the alliance, dubbed the G-8, had refused to meet with the commission and continued to bash its composition, it noted that the report’s findings bolstered opposition claims that the vote was tainted by vote-rigging and ballot stuffing.

The report, among other things, has called for a deeper verification of the vote to establish if there was “massive fraud,” and recommends sweeping changes in the electoral machinery, including in the membership of the CEP, before a second round. Members found that the vote was marred by egregious irregularities and a high presumption of fraud. For example, 57 percent of the audited documented lacked the signature or fingerprint of voters, while only 8 percent had no irregularities.

The cowardice of the members of the commission makes it impossible in such conditions to continue with the electoral process. G-8 opposition alliance

The report, however, failed to say who benefited from the irregularities and fraud, prompting the opposition alliance to accuse the commission of being afraid of its own inquiry.

“The commission is unable to identify who are the candidates who have qualified for the second round and to indicate that the results obtained by each candidate involved in the race,” Samuel Madistin, an attorney and former presidential candidate, wrote on behalf of the G-8. “The cowardice of the members of the commission makes it impossible in such conditions to continue with the electoral process.”