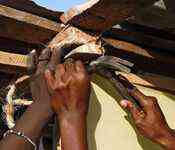 A year and a half after a deadly earthquake devastated its capital, 650,000 victims still wait for permanent housing in more than 1,000 unstable emergency camps across Haiti as a new hurricane season arrives.

Post-quake Haiti: Security Depends on Resettlement and Development , the latest policy briefing from the International Crisis Group, examines the immediate challenge faced by Michel Martelly, who replaced René Préval as president on 14 May. The frustrations of the victims still living in tents vulnerable to the storms that already have begun are growing, as are those with near identical unmet basic needs who remain in the poverty-stricken island’s countless urban slums.

“Haiti and its supporters now must turn to the humanitarian priority of national reconstruction: resettling earthquake victims, removing the rubble and rebuilding neighbourhoods”, says Bernice Robertson, Crisis Group’s Haiti Senior Analyst. “Adopting, communicating and setting in motion a comprehensive resettlement strategy, with full input from the victims and local communities, is the first critical reconstruction challenge President Martelly must meet in order to consolidate stability”.

The 2010 disaster killed over 250,000 and forced an estimated 1.5 million into camps in the hardest hit areas. The absence of a uniform government resettlement policy has stymied promised progress on decentralisation, economic renewal and reducing the vulnerability of overcrowded urban communities. Neighbourhoods victimised by decades of anarchic construction and weak to non-existent land titles and zoning remain highly vulnerable to natural disaster. Rampant evictions – without due process or tenable housing alternatives – have forced massive unplanned returns. Meanwhile, close to half the displaced have remained in the original camps, with no clear understanding of their future and rising unhappiness at the increased violence.

In order to develop the consensus needed to accelerate reconstruction and ease hardships, the new government must extend national dialogue beyond the political parties and the civil society groups mostly based in Port-au-Prince. Moreover, it should speed up investment plans in the eight major port cities and surrounding agricultural areas, in order to generate employment and stem the flow of rural migrants to the capital. Transition of the Interim Haitian Recovery Commission (IHRC) should be flexibly timed and aimed at strengthening the capacity of the country’s ministries and municipal governments to manage effective reconstruction. For stability to ensue, land tenure has to be made more secure, and land registries need to be improved.

All political actors need to make housing alternatives safer and more sustainable in Port-au-Prince and adjoining quake-hit areas. That requires a decentralised national reconstruction program such as is enshrined in the government’s Action Plan for National Recovery and Development (PARDN) and was endorsed at the March 2010 donors conference.

“The Martelly government must adopt a national resettlement policy rapidly, and donors must speed the financing of housing and neighbourhood reconstruction if Haiti is to right the imbalances that have made it prone to disasters, violence and conflict”, says Mark Schneider, Crisis Group’s Senior Vice President. “That policy should be less about closing the camps, and more about building stable, less violent communities, and not only in the capital”.