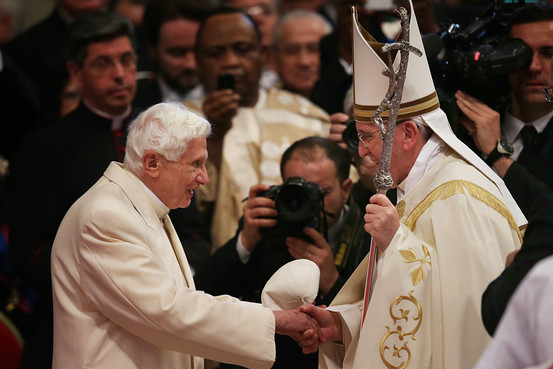 VATICAN CITY— Pope Francis created 19 new cardinals, some hailing from the poorest corners of the world, putting his stamp on the group of advisers who will help him decide on a raft of upcoming reforms, ranging from a shake-up of the Vatican’s scandal-ridden bank to a new approach on delicate issues such as allowing communion to divorced Catholics.

Last month, the pontiff announced the names of the new “Princes of the Church,” whose most important task is to elect the leader of the 1.2 billion-strong Catholic Church. Last month, he chose 19 men, 16 of which are under 80 and therefore eligible to pick the next pontiff. His choices reflect the vision that Pope Francis has set out in a papacy that is barely one year old but has electrified Catholics and non-Catholics alike.

In an elaborate ritual in St. Peter’s Basilica, the Argentine-born pontiff bestowed the famous red square hat, or biretta, on the new cardinals, whose composition reflects the church’s shift away from Europe, where the number of faithful is falling, and toward Latin America, Africa and Asia, where it is growing fast.

Pope Emeritus Benedict XVI, who shocked the world with his resignation last year, was also in attendance, a rare public appearance and his first at a liturgical event at St. Peter’s since he stepped down.

Ten of the 19 come from outside Europe, which has historically dominated the College of Cardinals. For the first time the College of Cardinals is evenly split between Europeans and the rest of the world. Two come from Brazil and the Philippines, countries with large Catholic communities that have traditionally been unrepresented. The pope appointed one each to three of the world’s poorest countries, Haiti, Burkina Faso and Ivory Coast, reflecting his special attention to the downtrodden.

“The Church needs your courage, to proclaim the Gospel at all times, both in season and out of season,” the pope told the new cardinals Saturday.

One cleric typical of the pope’s preferences is the new cardinal, Leopold Brenes Solorzano of Nicaragua. On his way to Rome this week, local television caught him wearing worn-out jeans and a simple cross, and turning out the light of his office as he left.

Pope Francis has expressed his vision of church that that is “bruised, hurting and dirty” from its efforts to seek out and help the weakest members of society and the oppressed. Even as pontiff, the pope lives in a modest Vatican guesthouse rather than in the papal apartments in the Apostolic Palace or uses a Ford Focus rather than a luxury car.

Last month, Pope Francis told the cardinals-to-be that their nomination didn’t represent a promotion but was instead a call to “service that demands a broader vision and a bigger heart.” He also warned against their celebrating with the lavish parties that some cardinals have staged in the past.

Saturday’s ceremony, known as a consistory, to elevate the 19 new cardinals reflected the differences between Francis and Pope Benedict. Francis wore his usual metal cross, plain white dress and a common pair of black shoes. At major liturgical ceremonies Pope Benedict often wore a gold cross, red papal shoes and in winter a cape trimmed with ermine, a fur long associated with aristocracy and papacies of the past. He created 90 cardinals in 5 consistories in his eight-year papacy.

During the ceremony, Pope Francis gave each prelate, with the exemption of 98-year of Loris Capovilla who was too old to attend, a biretta, a cardinal ring and a papal bull assigning a church in Rome. The hat is red to symbolize their readiness to give up their life for their faith.

With the new cardinals, the College of Cardinals is made up of 218 men. Of these, 122 are currently eligible to vote for a new pope in a conclave as they are under 80 years of age.

Saturday’s ceremony follows a busy week for Pope Francis. A special council of eight cardinals charged with advising the pontiff on a raft of reforms met in Rome, focusing in particular how to reform the Holy See’s financial institutions, including the troublesome Vatican bank. The pope has suggested he may shut the bank or transform it into a charitable foundation.

Cardinal Oscar Rodriguez Maradiaga of Honduras, the coordinator of the council of eight cardinals, said in an interview with French media that a “finance secretariat”—or a sort of finance ministry—could be established to oversee all the Vatican’s departments.

The pope also met about 150 cardinals who came to Rome for the consistory ceremony to discuss delicate concerning the family, such as divorce, premarital sex and contraception, saying that the church needs to respond with “intelligence, courage and love” to modern problems. This meeting was called ahead of the convocation of the world’s bishops — known as a General Synod—in October to discuss family issues.

In recent months, German bishops have tried proposing a way to allow remarried Catholics to take communion without an annulment of their marriage, but that was rejected by the Congregation for the Doctrine of the Faith, the Vatican’s doctrinal watchdog, headed by Gerhard Mueller, who was one of the 19 elevated to cardinal Saturday.

The Vatican recently surveyed dioceses around the world in preparation for the October synod, and the results showed large differences on church teaching on issues such as divorce, contraception and premarital sex between Africa and Asia—where the church is growing fastest and support of official doctrine is strongest–and Europe and North America, which tend to reject church teachings as outdated.

Write to Liam Moloney at liam.moloney@wsj.com