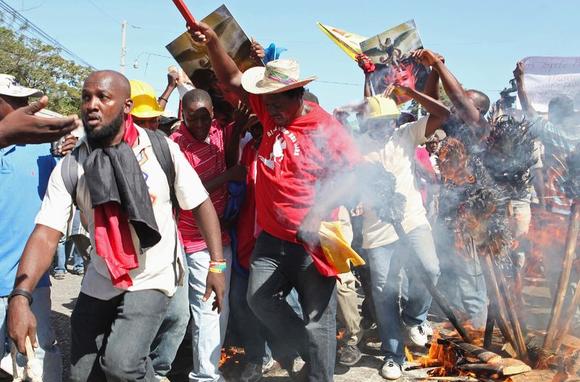 Demonstrators dance around a bonfire during an anti-government protest in Port-au-Prince December 6, 2014.

(Reuters) – The president of Haiti and heads of the country’s two houses of parliament reached a tentative agreement on Monday to avert a political crisis that has sparked nationwide protests.

The political accord announced late Monday seeks to open the way for approval by parliament of a new “consensus” government after prime minister Laurent Lamothe was forced to resign earlier this month.

The agreement would extend the terms of the Senate and the Chamber of Deputies, due to run out Jan. 12, but only if an electoral law is passed first.

If the parliamentary terms are not extended, Haiti would be left without a functioning government heading into presidential elections in late 2015.

The agreement would extend the terms of the deputies until April 24 2015 and senators until Sept. 9.

The political accord is likely to be favorably received by Haiti’s foreign donors, particularly the United States and the United Nations, who had expressed concern that the impoverished Caribbean nation was on the brink of political chaos again.

It might also appease opposition politicians and protesters who have been calling for a new government and long-overdue legislative and municipal elections.

On Christmas Day, President Michel Martelly nominated Evans Paul, a moderate opposition figure, as the new prime minister. His choice must still be approved by parliament before he can start forming a government.

“This is a good step taken towards the resolution of the crisis,” Paul told reporters on Monday, saying elections could be held within 120 days of a new electoral council being installed.

If approved, Paul would take over from Florence Duperval Guillaume, who was named interim prime minister on Sunday as a temporary replacement for Lamothe. [ID:nL1N0U50F0]

Lamothe was forced to resign after several weeks of protests, quitting after Martelly accepted the recommendations of a presidential commission appointed to defuse the crisis.

Haiti, the poorest country in the Western hemisphere, is still recovering from a 2010 earthquake that leveled much of the capital, Port-au-Prince. In recent weeks, demonstrators in several cities have accused the government of corruption.

Paul, 59, a former radio journalist, was elected mayor of Port-au-Prince in 1990 as an ally of two-time former President Jean-Bertrand Aristide, a fiery former liberation theology priest who was overthrown in 1991 and 2004.

Paul later split with Aristide, becoming one of his most vocal critics. He ran unsuccessfully for president in 2006, receiving 2.5 percent of the vote.