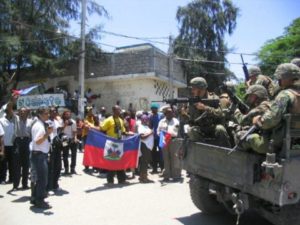 26 Jan 2010 15:15:42 GMT
Source: Reuters
WASHINGTON, Jan 26 (Reuters) – The U.S. military could begin scaling back its involvement in Haiti within three to six months as other international organizations assume larger roles providing security and disaster relief, senior Pentagon officials said on Tuesday.
Vice Admiral Alan Thompson, director of the Defense Logistics Agency, said military leaders envisioned a “six-month window … of intense support” from the Pentagon in response to the Jan. 12 earthquake that killed up to 200,000 people and left hundreds of thousands injured and homeless.
He described the U.S. military as committed to providing humanitarian and security support “until other organizations can take over the role.” But he added: “My sense would be that probably in the three-to-six-month time period would be when there would be efforts to try to transition some of the support.” Pentagon officials said the relief effort was a work in progress and that the timetable for any reduction in U.S. military involvement could change. “That (three-to-six-month time-frame) is certainly a good logistics planning window but the U.S. military is committed to being there as long as we’re needed,” said John Kirby, spokesman for the U.S. military’s Joint Chiefs of Staff.
The Pentagon has dispatched more than 15,000 military personnel to Haiti of which some 4,700 are on the ground. Thompson’s Defense Logistics Agency is rushing 14 million meal packages to Haiti as part of the relief effort, he said. (Reporting by Adam Entous; editing by Mohammad Zargham)