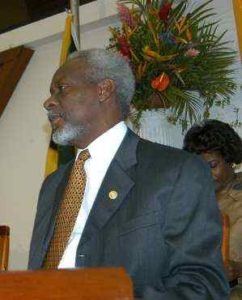 GEORGETOWN, Guyana, CMC – The special representative of CARICOM on Haiti, former Prime Minister of Jamaica P.J. Patterson has been invited to become a member of Haiti’s Presidential Advisory Council on Growth and Investment.

The Council will be made up of political and business leaders from around the world who represent a diverse set of skills and perspectives that together, President Martelly hopes, will contribute to a genuine transformation in Haiti.

In his invitation to Mr Patterson, President Martelly affirmed that the Special Representative of CARICOM was being invited because of “your pedigree, personal skills, demonstrated leadership and involvement in social causes.”

The Advisory Council will be charged with a three-fold set of objectives, as outlined in the invitation to Mr Patterson. These are to promote the brand called “Haiti”; to advise the office of the President on policy and strategic initiatives to improve the country’s competitiveness; enhance the economic outlook and attract investments that will create sustainable jobs; and also to solicit investment sources to spur economic growth.

President Martelly accepted that the next several years promised to be challenging, but asserted that they would be exciting ones for Haiti. He added that his administration remained committed to transforming the country as a place to “conduct business”, create sustainable jobs and establish an enduring foundation upon which Haiti may rise to economic prosperity. He said that the Advisory Council is expected to play a critical role in achieving this vision.

Among the select group invited to sit on the Council is former U.S. President Bill Clinton who, like Mr Patterson, is a member of the Interim Haitian Reconstruction Committee (IHRC).

Mr Patterson has a long history of concern and commitment to Haiti, as part of the Caribbean family. It was due in no small part to his personal activism that Haiti was invited to become a member of CARICOM.