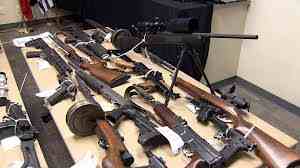 By Amy Pavuk, Orlando Sentinel
12:16 p.m. EST, February 21, 2013
Federal agents say an Orlando man has been buying guns at Orlando-area businesses, illegally shipping the weapons to Haiti, and then selling the firearms there. Kenson Jean, 32, was indicted this week by a federal grand jury after a Bureau of Alcohol, Tobacco, Firearms and Explosives investigation found he has shipped weapons to his native Haiti since at least October.