Britain’s first chargé d’affaires in Haiti in nearly half a century is greeted with mix of enthusiasm, scepticism and suspicion` 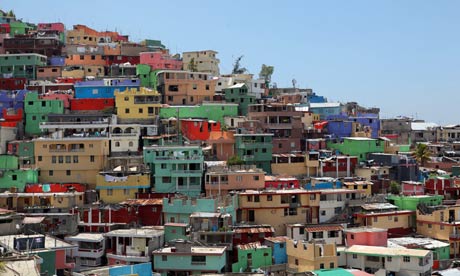 Britain’s first chargé d’affaires in Haiti in nearly half a century follows in the fictional footsteps of a diplomat from a Graham Greene novel set in the darkest days of the dictatorship of François “Papa Doc” Duvalier.

Rick Shearn, the new one-man mission in Port au Prince, is in the vanguard of a new wave of British diplomacy that aims to reverse the retreat of UK influence in Latin America. His arrival in June has drawn a mix of enthusiasm, scepticism and suspicion in this heavily French-influenced Caribbean nation, where the last representatives of the Queen were expelled.

One of his predecessors, Gerard Corley Smith, was kicked out in 1962 for criticising the excesses of the Tontons Macoute militia who allegedly tortured or murdered thousands of Haitians. The Duvalier government accused Smith of “impertinence and haughtiness as a British colonialist”.

But he was an inspiration for a character in Greene’s 1966 novel, The Comedians. In that account of Haiti’s “deepening night”, the author describes an unnamed British diplomat as “courageous and humorous … intelligent, watchful, amused and critical in just the right way … the perfect spectator”. Papa Doc promptly banned the book, and the British embassy closed soon afterwards.

The historical significance of reopening the mission is not lost on Shearn. “It was quite a realisation that Greene’s British chargé d’affaires referenced in The Comedians is my immediate predecessor,” he says.

The relaunch is part of the foreign secretary William Hague’s plan to have 20 new missions around the world by 2015 and to spread “British diplomacy to places that have not felt it in decades”. It is being done in a cost-effective and pared-down fashion within the large and well-appointed Canadian embassy.

The long UK absence has made recent shared experiences hard to find. When the Foreign Office searched for a prominent figure out of the 400 or so British Haitians in the UK, the best they could find was a third-division goalkeeper. Even Shearn, who must fly the flag and plan for an annual trade mission, admits: “We may no longer be the first partner that Haiti and Haitians think of when deciding where to purchase goods or send children to university … though the UK’s reputation for quality in manufacturing, academia and construction is still here.”

There are hopes that the new chargé d’affairs can pursue the kind of shrewd mercantile statecraft that boosts UK plc. But Land Rover and JCB heavy machinery export deals and building contracts for quake-destroyed Port au Prince may be some way off. “It’s early days for that,” says the foreign office minister Hugo Swire, “even though Britain has had diplomatic relations with Haiti longer than any other country in the Caribbean, having recognised it in 1833,” three decades before the United States.

Reactions among Haiti-watchers have varied. Robert Maguire, an old Haiti hand and director of George Washington University’s Latin America and hemispheric studies programme, is sceptical. “What are UK interests in Haiti?” he says. “Potential mining? Garment assembly? Keep an eye on the Turks & Caicos?”

Stuart Leiderman, a US environmental and refugee specialist, suggests the British government’s interest may be “the Bahamas [which] is now at least 25% Haitian”.

But Bernard Craan, chairman of Sofides, Haiti’s only private development bank, which hands out loans to small and medium-sized enterprises, says every opportunity to formalise relations with “a country as developed and structured as the UK can only be a good thing, and Haiti’s organised private sector is of the same opinion”.

In the short term, a permanent UK diplomatic presence is likely to help get promised projects off the ground, not least an urban development funded by the Prince’s Trust and badly needed housing planned by Haiti’s honorary consul in the UK, architect John McAslan. There’s also talk of Britain playing a greater role in Minustah, the UN peacekeeping mission, and helping to train the Haitian national police.

Having arrived with no more than schoolbook French and a brief to rebuild networks, Shearn will have his work cut out. But with his brief career path already including another of Greene’s more challenging locales, Sierra Leone – the setting for The Heart of the Matter – he will be hoping not to suffer the same fate in Port au Prince as his fictional predecessor who ultimately found “conditions of life in the capital have defeated him”.