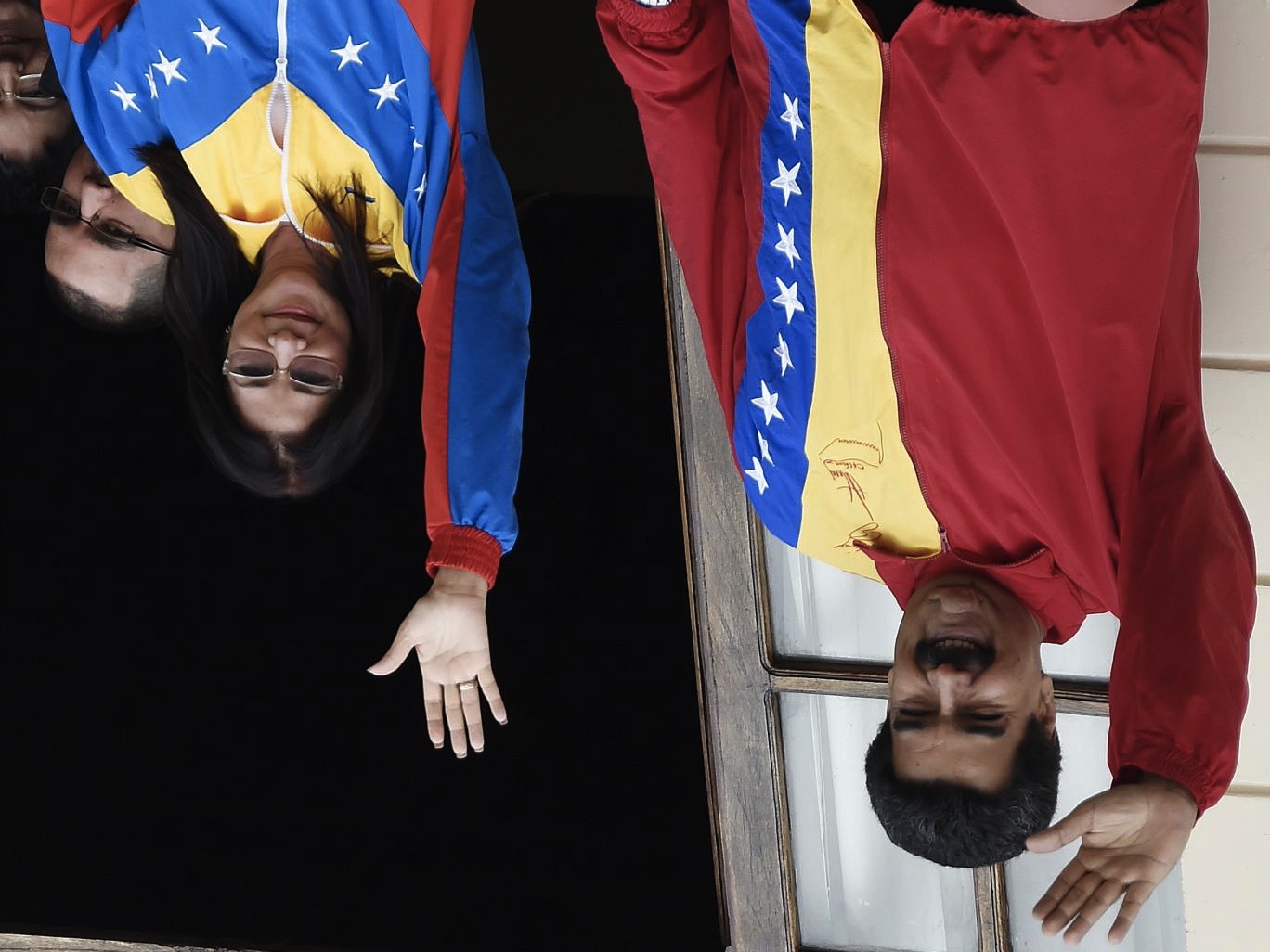 THIS PHOTO IS DELIBERATELY UPSIDE DOWN

PORT-AU-PRINCE (Reuters) – The close ties between Venezuela and Haiti were not enough to stop U.S. law enforcement from arresting two relatives of Venezuela’s president when they flew into the Caribbean nation this week, showing the United States still exercises significant influence in the region.

Venezuela is one of impoverished Haiti’s main benefactors and the Latin American country has won allies on Haiti and across the Caribbean by offering cut-rate petroleum exports.

The two men are nephews Venezuelan President Nicolas Maduro’s wife, Cilia Flores. They were arrested by Haitian anti-narcotics police and turned over to U.S. agents who had an arrest warrant issued by a New York judge, a senior Haitian official told Reuters.

Hours later they were flown out of the country with the blessing of Haiti’s Justice Ministry and accompanied by agents from the U.S. Drug Enforcement Administration, the official said.

They were caught in a sting operation as they allegedly tried to arrange the sale of a cocaine shipment that was to be sent to the United States via Honduras.

The United States and Haiti have an extradition treaty dating back to 1905 but it does not appear to have been applied in this case. That helped expedite the transfer of the two men to the United States as extradition requires a series of legal steps, including informing foreign consular officials of the arrest, experts said.

“This was what you call an expulsion,” said David Weinstein, a former federal prosecutor in Miami who has handled a number of Haiti drug cases. “It’s a gentleman’s agreement to provide assistance. Basically, Haiti said it didn’t want them and the U.S. could have them, simple as that.”

Venezuela’s ambassador to Haiti, Pedro Canino, told Reuters that he was in the dark. “We have been told absolutely nothing here,” he said.

Venezuela has been a generous ally of Haiti over the last decade, including the preferential oil agreement known as Petrocaribe.

The program allows beneficiary nations to buy fuel from Venezuela at favorable rates and with easy payment plans.

It greatly benefited Haitian President Michel Martelly’s government but has lost value as the price of oil has dropped. Martelly steps down from office in February.

The airport in Haiti’s second-largest city of Cap-Haitien is named Hugo Chavez International in honor of the late Venezuelan leader and Maduro’s predecessor and mentor.

This week’s operation was the latest in a string of arrests of high-profile drug suspects wanted in the United States and sent there under expedited legal proceedings, experts say.

In May, the son of former Honduras President Porfirio Lobo, was arrested in an anti-drug operation and flown to New York by the U.S. Drug Enforcement Agency.

The expulsion policy dates back more than a decade when Haiti began to emerge as a major cocaine corridor to the United States. Haiti’s weak political institutions and corruption made it fertile terrain for South American drug traffickers.

Under former President Jean-Bertrand Aristide, a slew of senior officials were indicted on drug charges in Florida. A former senator, a former chief of palace security, a former police commissioner and the head of the police narcotics unit all wound up in jail in the United States.

“There are some basic terms that they follow. The U.S. embassy makes a request and Haiti obliges,” said Eduardo Gamarra, a professor of international relations at Florida International University, who also does political consulting in Haiti.

One former senior Haitian government official recalled a meeting with the U.S. attorney general and the head of the DEA where Haiti’s then-President René Préval offered full cooperation on drugs.

“The system was so weak, the police so corrupt, that we couldn’t deal with the drug traffickers,” he said. “The justice system is basically for sale, so Préval told the Americans, ‘If you want them (drug suspects) come and get them.'”

(This story has been refiled to remove byline and changes description of Haiti in first paragraph to Caribbean nation, not island)

(Reporting by David Adams in Miami and Reuters in Port-au-Prince; Editing by Kieran Murray and Lisa Shumaker)