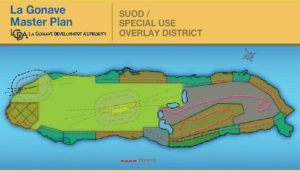 A summary of the “La Gonave Master Plan”:
The developer, Global Renewable Energy, claims to be focused on “alternative energy projects,” and has already pitched the plan to “buy” the island of La Gonave to the Haitian government, yet a public disclosure of the status of any agreements is unknown outside of the principles involved.

The developers’ first priority is to build a “crude oil refinery”, “petroleum product tank farm”, “food processing plant”, and “industrial port” in the planned “industrial city”, but they are promoting their project (Ironic at all to call it the “La Gonave Master Plan?”) as an “island paradise and business mecca”, that will be a “home for international business and the destination for world travelers.” Why develop La Gonave? Because “Developers within the energy sector will be more likely to assume the risks due to the large profit margins that may be realized by them.” GRE minimizes the environmental impact that an oil refinery on La Gonave will have, saying:

“The oil refinery is created from mini-refineries. This type of refinery has much less impact on its surroundings. The refinery will be located within the industrial city and visually isolated from the rest of the island by the Jatropha Plantation. Additionally, the refinery and industrial city are located on La Gonave’s most western tip thus minimizing any impact on La Gonave. The prevailing wind direction is from the east. This prevailing wind direction will carry the minimal emissions out to sea to the west thus not negatively impacting La Gonave or the rest of Haiti

When the project is complete in the 20 year span visualized by GRE, Haitians who remain on the island, will be 60% employed (“a large trainable workforce”) by the project’s proposed businesses (mostly the “industrial plantation”). Haitians might well ask, what of the 40% not employed? Also, what of the fact that local island residents will be hindered from traveling freely from/to the island because the only way to get there will be via a private executive airport or the large industrial dock for cruise ships?

The majority of the island (a 65,000 acre project) will be taken up by an “industrial plantation.” Haitians should be concerned that the Republic of Haiti’s government will only be designated as a “shareholder” in the proposed agreement. Who will be the civic authorities in this “island paradise”? It should be unacceptable that this “master” plan proposes a sort of Vatican City of the Caribbean with no official government oversight.

Will Haitians want a cadre of international business executives placidly profiting from the natural resources of Haiti and running the island of La Gonave like a “business?” Hopefully not.

The master plan has no seeming plan to reimburse the people they will be displacing from their lands. In Haiti, there have been protests held in opposition to projects similar to this proposed plan, since they displace and disenfranchise the peasants by taking away their land. One example is this protest that was held in 2007 on World Food Day by peasant groups, who presented a petition against Jatropha plantations to the Haitian Parliament. The developers and the Haitian government (if this plan gets approval) can expect the same response. Haitian popular organizations will exercise their democratic rights and want a say in what happens to Haitian lands.

Haitians should put forth a competing idea or propose amendments that benefit the Haitian people. The plan might for instance, give a share of the profits from industries on the island to social services or the government could institute a minimum salary or dividend (like in Brazil or Alaska); or fund proper health-care facilities, schools, social services; or require that the locals form the governing body of the island; or that proper jatropha farming or other alternate energy form do not disturb the ecosystem of the island; or that a ferry system to/from the island be financed and run from a public fund.

5 thoughts on “Oil Developers Want Ownership of the Island of La Gonave: Is Haiti FOR SALE??”