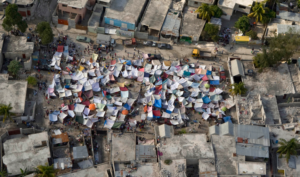 I am sleeping on a 2 inch foam pad, spread on the floor of my office.

The others are sleeping outside  on the terrace.

No one wants to sleep inside since the 12 January quake that took over 300,000 lives.

It will now take many more.

I am fully clothed, including my sneakers – in case another quake comes and I have to scramble for safety.  I have also slipped into one of those down vests, favored by hunters in Oregon.  Normally a single sheet will suffice, as a shield against aggressive mosquitoes  that are constant companions in a darkened room.  Two heavy  folded bedspreads  cover me from head to toe and this is not enough. I am cold, a cold that I can feel in the joints of my body. I am used to the cold, having grown up in an area that has white Christmases and sub-zero temperatures.

This night – 8 March 2010 – will be the first, or second, perhaps third step along  an irreversible path to Death for many, many Haitians who have little or no shelter, and  no covering for their bodies, or those of their small children. A soaking rain will chill these Haitians even further.

It is Preval’s  recipe for disaster that even Adolf Hitler would admire as a method to eradicate an unwanted population.

But what is Preval’s goal? Wealth ? – He has stolen hundreds of millions.

A place in history? But who would want to be remembered as the Father of Haiti’s death as a functioning nation?

At a point, where he could have reversed his criminality – having already stolen a Midas’ fortune –  Preval is a leopard who cannot change his spots. Preval will be remembered for what he is, a failed baker…an ex-taxi driver from New York.. the leader of Haiti’s major gangs, responsible for kidnapping and murder… a coordinator of the cocaine traffic… and a mere shadow of Jean-Bertrand Aristide.

Many might criticize Aristide, but the Little Priest would not allow this to happen to His People.

He would be with them in this their hour of need.