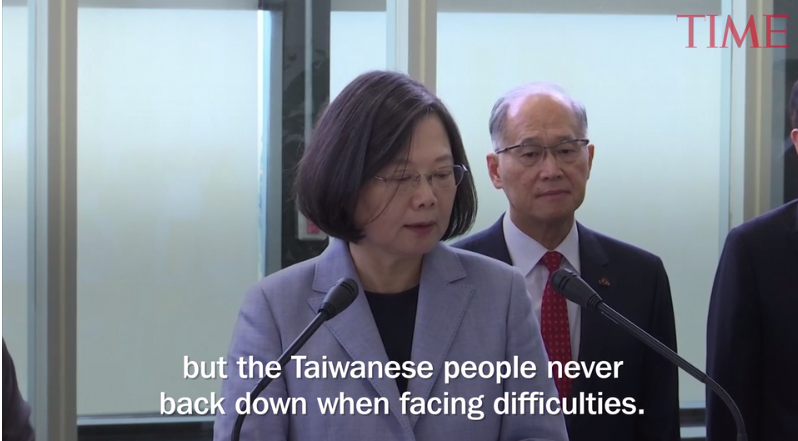 By Casey Quackenbush
1:50 AM EDT

As China ramps up efforts to scrub Taiwan from international recognition, the island’s President Tsai Ing-wen struck a defiant tone Sunday and vowedthat “no one can obliterate Taiwan’s existence” before departing for the U.S.

“In going abroad, the whole world can see Taiwan; they can see our country as well as our support for democracy and freedom,” said Tsai before her flight to Los Angeles, where she will stop en route to Belize and Paraguay, Reuters reports. “We only need to be firm so that no one can obliterate Taiwan’s existence.”

In recent months, China has doubled down on its campaign to assert Chinese sovereignty over the self-ruled and democratic Taiwan, which Beijing considers a breakaway state. China hasorderedforeign airlines and other businesses to stop referring to Taiwan as a nation on their websites, has excluded Taiwan from international forums, and pressured countries around the world to cut diplomatic ties. Just 18 countries now recognize Taiwan, with Burkina Faso and the Dominican Republic switching their allegiances to Beijing this year.

Arriving in Los Angeles on Sunday, Tsai addressed a group of Taiwanese-Americans before visiting the Ronald Reagan Presidential Library. She will also transit in Houston on her way back. China had called on the U.S. to block her transit in the county.

In the run up to Taiwan’s local elections in November, Tsai is looking to reaffirm Washington support.

While the U.S. formally severed official diplomatic ties with Taiwan in 1979 to support Beijing’s “One China” policy, it still enjoys a “robust unofficial relationship” with the island nation of 23 million people, according to the State Department. The U.S. suppliesTaiwan with major American-made military hardware, putting Taipei among the top 10 U.S. trade partnerswith $65.3 billion in total two way trade during 2016. In June, the U.S. also quietly openeda new $250 million de-facto embassy on the island the same day as the Singapore Summitbetween President Donald Trump and North Korean leader Kim Jong Un.

Further adding to China’s frustration with Washington, the U.S. and China are engaged in an escalating trade war.