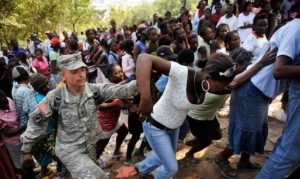 At the head of an administration with no intact ministries, infrastructure or army, where vital meetings take place under a mango tree and a coconut palm, a defiant President Préval told The Times yesterday that he is taking back control of Haiti.
“We have suffered a catastrophe that would have been terrible in any country,” he said. “It is all the more so in ours. The presidential palace has fallen. The parliament has fallen. The palace of justice has fallen. Most government buildings have been destroyed with all their records. Yet we are making progress, and the people know it.”
Standing in front of the single-storey police station into which his administration has been crammed since January 12, Mr Préval added: “They know that we have cleared 70,000 bodies from the streets. They know that petrol stations are working and that banks are opening again. This is not a miracle. It is a result of the work we have been doing. We are in the process of taking back control.”
It was more an admission of the obvious than a boast: the President is not yet in control of his own country, and whether he can regain it depends largely on the stream of foreign visitors to his temporary office. Yesterday they included the Rev Jesse Jackson, the US Ambassador, and a senior French technocrat, Michel Pinauldt, dispatched by President Sarkozy to offer Mr Préval a plan to rebuild his Government robustly enough to withstand the next disaster.
Defiance is not in any case Mr Préval’s usual style. His presidency had been described as minimalist even before the earthquake struck, and he has been practically invisible to the Haitian public since. He is famously low key, and his first appearance in front of his temporary office would have been comical if it did not reflect such desperation. He ducked outside with a mobile phone pressed to his ear. Asked to comment on the crisis paralysing his nation he said: “Not now. I’m in a Cabinet meeting but I can’t get a signal in there.”
Outside the presidential compound, which is the size of a small playground, there were some signs of progress amid the overwhelming sense of chaos.
A Haitian official said that the Government had delivered 90,000 ready-to-eat meals on Wednesday and had 700,000 more in store. Government water trucks would soon serve 500,000 people a day and that 300 distribution points for food and medicine were being set up in local government buildings and staffed with volunteers.
More than a dozen hospitals are now functioning, yet there is still a critical shortage of bed space for the injured — and of food and water for the fit. Whole neighbourhoods have yet to see a sign of the foreign aid mountain now being stocked up at a rate of 200 flights a day. Those who can afford to have already left Port-au-Prince, and those who remain are still forced to use its squalid streets as dormitories.
“There is huge disorganisation preventing the sick and hungry getting the help they need, even though that help is now at hand,” said Mr Jackson, who sat down with Mr Préval for 30 minutes to express his solidarity with the western hemisphere’s only country founded by freed slaves. “This is above a lesson about poverty. In 1989 there was a 7.0 earthquake in San Francisco and 63 people died. A 7.1 in Port-au-Prince killed 200,000. That’s why beyond the rescue stage there must be a commitment to reconstruction.”
To plan that reconstruction Mr Préval’s Prime Minister, Jean-Max Bellerive, chairs a meeting each day at 8.30am under the palm tree to the left of the presidential office. It is attended by ambassadors, the head of the UN stabilisation mission, and representatives of foreign aid agencies that have set up camp half a mile to the west.
“Small problems of co-ordination can lead to great problems in terms of human suffering,” Mr Bellerive said. “Our main task is to improve co-ordination between the Government and the international agencies, and the best time to do this is at the beginning of the day, out here in the sun.”
Then the Government goes back inside. Press briefings are held under a mango tree nearer the street, while Mr Préval attempts to stamp his authority on the unending crisis at daily 10am Cabinet meetings in what used to be the conference room of the judicial police. The President has been criticised for not being more visible since the earthquake, and written off for failing to give even the impression of being in charge.
Possessed of extraordinary calm, he does not rise. Asked if the 10,000 US troops expected on his streets to help to distribute aid amounted to colonialism by other means — as the Venezuelan President, Hugo Chávez, has said — he replied that he was grateful for help from the US and Venezuela alike. Asked if he was clinging to Haiti’s sovereignty while losing control of its people, he admitted to “a lack of control in general” but refused to answer in the first person.
“On the night of the earthquake I toured the capital,” he said. “I have done so every day since. But the vehicles they use to drive me around would be better used for searching for survivors. What is vital is to co-ordinate the efforts of those trying to help us, and I can’t do that if I spend my whole time evaluating the damage.”
Mr Pinauldt, the Frenchman given the task of rebuilding Haiti’s Government behind the scene, looked on. “He is like he used to be,” he said of Mr Préval. “He is attentive. He consults and listens, but his Government is chaos.”

1 thought on “No ministries. No infrastructure. But René Préval tries to regain control in Haiti”