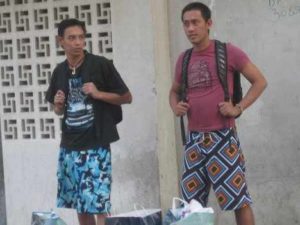 Both the Office of the Vice President and the Department of Foreign Affairs (DFA) have warned against the unabated trafficking of Filipino migrant workers to Haiti, the poor Caribbean country devastated by a magnitude-7 earthquake in January 2010.

In a statement, Vice President Jejomar Binay said that Haiti “was ravaged by one of the world’s most devastating earthquakes (which killed over 310,000 Haitians, injured another 300,000 and left more than one million homeless) followed by a cholera outbreak. Up to now, Haiti continues to feel the effects of these tragic and unfortunate incidents.”

Binay, also the presidential adviser on overseas Filipino workers’ concerns as well as head of both the Inter-Agency Council Against Trafficking (Iacat) and Presidential Task Force Against Illegal Recruitment, warned that “an apparent syndicate continues to recruit and deploy workers for nonexistent jobs in Haiti.”

Last month, Fil-Am Star, a US-based online news agency, reported that human trafficking syndicates were “running circles around Philippine authorities despite a crackdown on the illegal recruitment of Filipinos for nonexistent jobs in Haiti.”

It said another 40 Filipinos had arrived in Port-au-Prince, the Haitian capital, “since the (Philippine Embassy in Cuba) exposed the illegal deployment of 26 workers last year, many of whom have remained jobless.”

The OFWs were “duped into coughing up as much as P500,000 each in exchange for supposedly high-paying supervisory and managerial jobs in factories and resorts” in Haiti, Fil-Am Star said.

It quoted Philippine Ambassador to Havana Maximo Domingo as saying that human traffickers brought their Filipino victims “first to Nassau, Bahamas, before sending them to Port-au-Prince.”

“The Haitian government does not require visas for Filipinos who want to travel to Haiti as tourists. This loophole is currently being used by illegal recruiters to bring in undocumented workers to Haiti,” Maximo said.

Like all other Philippine missions overseas, the Philippine Embassy in Havana—which has consular jurisdiction over Haiti, the Dominican Republic and Jamaica—is engaged in an intensified campaign against human trafficking syndicates victimizing OFWs, said Raul Hernandez, the new DFA spokesperson.

“Our embassies and consulates all over the world conduct regular information drives with the help of media and Filipino communities, extend assistance to the victims, identify the illegal recruiters and coordinate with local lawyers in prosecuting members of criminal syndicates in foreign jurisdictions,” Hernandez told the Inquirer.

1 thought on “No jobs in Haiti, Filipinos warned”