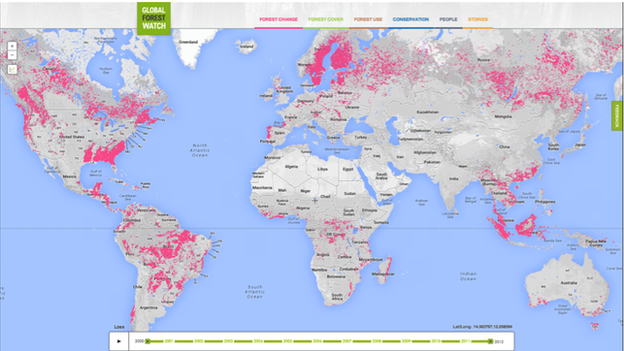 Highlighted in red, the new tool can show the scale of tree cover loss between 2000 and 2012

A new global monitoring system has been launched that promises “near real time” information on deforestation around the world.

Global Forest Watch (GFW) is backed by Google and over 40 business and campaigning groups.

It uses information from hundreds of millions of satellite images as well as data from people on the ground.

Businesses have welcomed the new database as it could help them prove that their products are sustainable.

Despite greater awareness around of the world of the impacts of deforestation, the scale of forest loss since 2000 has been significant – Data from Google and the University of Maryland says the world lost 230 million hectares of trees between 2000 and 2012.

From now on, the bad guys cannot hide ”

Forest campaigners say this is the equivalent of 50 football fields of trees being cut down, every minute of every day over the past 12 years.

One of the big problems in dealing with tree loss has been a lack of accurate information. Over the same time period as all these trees were lost, around 800,000 sq km of new forest was planted.

To tackle the dearth of reliable and up to date information, the US based World Resources Institute (WRI) has lead the development of GFW, using half a billion high resolution images from Nasa’s Landsat programme. 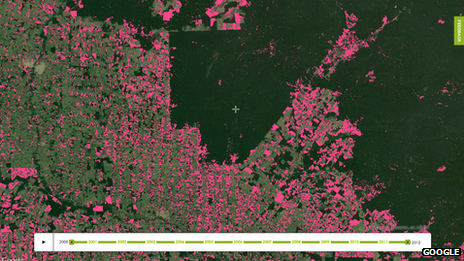 An image from Brazil shows the deforestation, highlighted in pink, taking place next to the lands of the Surui tribe

The system utilises the cloud computing power of the Google Earth Engine, the Google Maps Engine and new algorithms developed by the University of Maryland.

While high resolution images of global tree loss and gain are updated annually, data on tropical forests at a resolution of 500 metres is updated monthly. 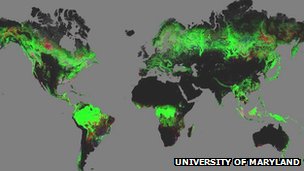 “From now on, the bad guys cannot hide and the good guys will be recognized for their stewardship.”

The GFW technology will allow campaigners and local communities to upload information, pictures and videos from vulnerable forest areas around the world.

The technology is said to be easy to use and will incorporate information showing protected areas, logging, mining and palm oil concessions and daily forest fire alerts from Nasa.

The tool will be aimed at politicians and decision makers but also at indigenous groups.

For governments in countries like the Democratic Republic of Congo and Indonesia, the technology could be useful in helping enforce the laws on logging that are often flouted.

When tree losses are detected, alerts can be sent out to a network of partners and citizens around the world who can take action.

GFW is also being backed by large businesses including Nestle and Unilever. 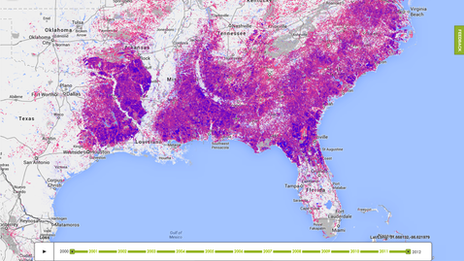 Suppliers of commodities such as palm oil, soy and timber products can use the online database to show that their products come from legal and licensed sources.

“Deforestation poses a material risk to businesses that rely on forest-linked crops. Exposure to that risk has the potential to undermine the future of businesses,” said Paul Polman, CEO, Unilever.

“As we strive to increase the visibility of where the ingredients for our products come from, the launch of Global Forest Watch – a fantastic, innovative tool – will provide the information we urgently need to make the right decisions.”

Those behind the new online tool believe it could not only allow campaigners to hold large corporations to account over the use of sustainable products, but could also promote greater trust between traditionally suspicious groups.

“Civil society will have a tool to maintain democratic vigilance over their governments,” said Felipe Calderon, the former President of Mexico.

“The partnership we are launching will, I believe, change the current paradigm that in the fight against climate change it is corporate interests versus governments versus activists.”

The technology has been funded by grants from the UK, Norwegian and US governments.