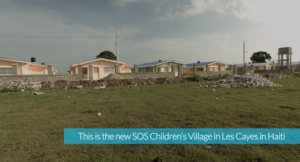 It had been a week since Nicole started preparing all the details. Labelled boxes separating her family’s belongings were piled in every corner of the house. But the large cardboard ones were special, for they contained each and every child’s toys. Soon they would finally move to the brand new buildings of SOS Children’s Village Les Cayes.

Nicole Princivil is a mother to nine children, aged between 9 and 17 years old. And, after four years together, this is the first time they will enjoy being in their own house. Nicole and the kids couldn’t be more thrilled. “We feel happy because in the Village there is sense of community and extended family. Outside is not the same. At the Village we find more support and we feel safer,” she says.

The story of Nicole’s SOS family started soon after January 2010. Following the fierce earthquake that ruined Haiti, almost 400 children arrived at SOS Children’s Villages in Santo, a province nearby the capital Port-au-Prince.

“After the earthquake, there were problems in Haiti. We had children living in the street because their parents died and some of them were living in really critical situations,” she explains.

Whenever possible, children were reintegrated to their families of origin, although unfortunately, some would never see their parents again. Of the 400 children who arrived at SOS Children’s Villages in Santo, it turned out that 106 children were orphaned and had no parental care. Of those who could not be reunited with family, 43 went to live in two existing SOS Villages in Haiti. For the rest, there was a plan of building a new Village in the countryside. As a temporary measure, some houses were rented in Port-au-Prince and, afterwards, in Les Cayes, to shelter them until the construction was finished.

The new Village will offer a new lease on life for children like Charles, who has just turned 9 years old. As a consequence of the trauma of the earthquake, children were having a hard time at school. Charles was not an exception. His SOS mother Nicole supported him, giving the child extra attention and working on the boy’s self-confidence. Soon after the earthquake, all SOS staff received training to improve their handling with the kids.

“I used to say: your life is not over, even if your father and mother are dead, you must go on,” says Nicole. Now, Charles performs well at school. He explains that he is very found of geography and “mom’s cooking”.

Nicole’s current challenge is to understand the different kinds of attention every child needs. So far she is proud of the road they have built together. “He is a really pleasant kid and very thoughtful. Whenever I’m introspective, he comes and asks me what’s the matter. I say ‘nothing’ and then he asks: ‘Are you well?’”

For Charles, moving into the new facilities of Les Cayes represents the opportunity to see his SOS friends more often. They used to hang out together when he lived in Santo. However, this pleasant memory connects him with the hard life they had to endure while living in tents.

Nicole is cheerful with this new perspective. For the past three years they were living in rented houses, first in Port-Au-Prince and then in Les Cayes. Although comfortable, she says the accommodation in the cities does not allow a village feeling.

“What could make the children happier is to come to the village, meet friends more often to have fun, talking and playing,” she says.