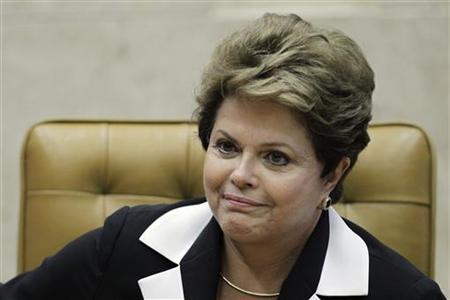 (Reuters) – Brazilian President Dilma Rousseff, moving quickly to nip a new scandal in the bud, ordered the dismissal on Saturday of government officials allegedly involved in a bribery ring, including the country’s deputy attorney general.

Federal police raided government offices in Brasilia and Sao Paulo on Friday and arrested six people for running an influence peddling ring that sold government approvals to businessmen in return for bribes.

Among those under investigation are the former personal secretary of ex-president Luiz Inacio Lula da Silva, Rosemary de Noronha, who has headed the regional office of the presidency in Sao Paulo since 2005.

The bribery scandal erupted on the heels of Brazil’s biggest political corruption trial that sentenced some of Lula’s closest aides to prison terms for buying support in Congress for his minority Workers’ Party government after taking office in 2003.

Rousseff, Lula’s chosen successor, was not affected by the vote-buying scandal and she has built on his popularity by gaining a reputation for not tolerating corruption. But the ruling Workers’ Party was rocked by the scandal which tarnished Lula’s legacy even though he was not implicated.

The new corruption case could further hurt the standing of Lula, who remains Brazil’s most influential politician.

Police accused the brothers of recruiting second-tier government employees who would be open to bribery, while a third brother also under arrest, Marcelo Rodrigues Vieira, contacted businessmen willing to pay for false or speeded-up approvals.

Police have been investigating the bribery ring since 2010 when an official in the government accounting office who was offered $150,000 for a favorable report got cold feet, returned the money he had been paid and blew the whistle.

Early on Friday, police seized computers and data from the Brasilia office of Deputy Attorney General Jose Weber de Holanda Alves, who has been dismissed and is under investigation along with a dozen other people, including a former senator.

“By presidential decision, all the government employees under investigation by the Federal Police will be dismissed or fired from their positions,” a statement form Rousseff’s office said. She ordered all agencies mentioned in the police probe to open internal investigations.

Police are investigating possible bribery cases at several other federal agencies, including the Ministry of Education.

While Noronha served as chief of staff of the president’s regional office in Sao Paulo, Rousseff had inherited her as a Lula appointee.

Veja news magazine reported that Noronha, who was very close to Lula and traveled with him abroad when he was president, received bribes for influence peddling that included a luxury cruise trip and plastic surgery.