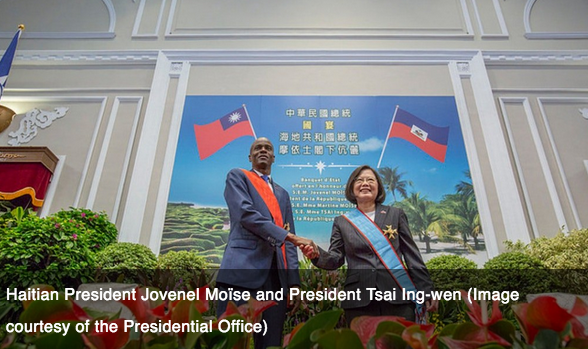 TAIPEI (Taiwan News) — While Taiwan’s Pacific ally Nauru has joined the Marshall Islands in expressing its solidarity with Taiwan, the island’s relations with the Caribbean nation of Haiti are facing a growing challenge from China.

Taiwan lost two Pacific allies — the Solomon Islands and Kiribati — last week in what the country’s foreign minister, Joseph Wu (吳釗燮), described as “diplomatic assault” by China. The Taiwanese government has long condemned Beijing for snatching up its allies, most of which are small and impoverished nations, through financial enticement and political pressure.

China’s aggression against Taiwan has become more intense since President Tsai Ing-wen (蔡英文) of the independence-leaning Democratic Progressive Party (DPP) was elected to office in 2016. With the 2020 presidential election drawing near, the island’s national security authorities recently warned that Taiwan could lose at least one more ally before the end of the year.

On Thursday (Sept. 26), Nauru President Lionel Rouwen Aingimea issued a statement to affirm his country’s ties with Taiwan. “Nauru considers its relationship with Taiwan as that of family and we stand with Taiwan in upholding democratic values and the rule of law,” he said.

“Both Taiwan and Nauru have different challenges, but what links us are the values of democracy, freedom, the rule of law and global responsibility,” declared Aingimea. This statement followed a resolution passed earlier this month by Marshall Islands’ parliament expressing its support for continued diplomatic relations with Taiwan.

Despite solid support from two of Taiwan’s four allies in the Pacific, the country is facing a greater challenge on the other side of the Pacific. It has been reported that China has launched a campaign to win over Haiti with promises of monetary assistance and cooperation projects.

“If the Haitian government can uphold the one-China principle, the Chinese government is willing to establish normal country-to-country ties with Haiti and enhance cooperation in politics, the economy and trade, public hygiene and education,” said Wang Xiangyang, a senior Chinese official posted in Haiti, reports the South China Morning Post. Over the past three years, China has poached three of Taiwan’s Latin American allies, including Panama, the Dominican Republic, and El Salvador.

Haitian Foreign Minister Bocchit Edmond has reportedly said Haiti continues to collaborate with Taiwan in various areas, but the country encourages more investment from Taiwan. Taiwan’s foreign ministry has said the government would make every endeavor to maintain its diplomatic relations.