Here’s a guy who was labeled a terrorist, under the Aristide/Lavalas banner.

On December 16, 1991  he put the Mob on the street at 11 AM election day, at the French embassy, with its illegal FM transmitter declared Aristide the winner, even though the polls didn’t close for hours.

Heaven help the person who challenged this! They would be necklaced.

He burned the old cathedral, in downtown Port-au-Prince so that the UN’s $300,000 donated to restore it could be stolen.

In January of 1991 he was directly responsible for the massacre of 247 supporters of Doctor Roger Lafontant.

He controlled the street Mob for Aristide, using it to terrorize anyone who questioned the Little Priest’s erratic rush to become dictator.

Evans Paul’s involvement with the necklacing of many is well-known.

During a recent government they allowed Evans Paul to appoint the Minister of Commerce. When she did not deliver enough money to him he went to her office and beat her up.

He has stolen whatever has been available, whenever, without bias.

Not much of a basis for a new Prime Minister.

Perhap President Martelly thinks Evans Paul will take the focus off of Sophia, Kiko and Olivier.

A sad day for Haiti. 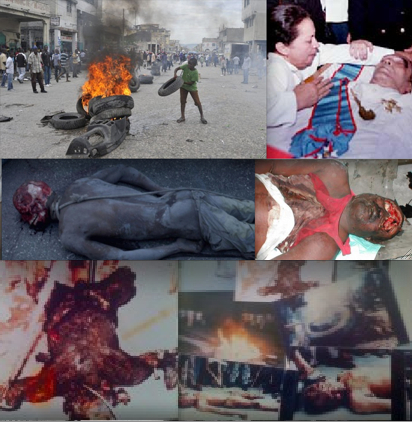 10 thoughts on “MY GOODNESS!! EVANS PAUL CHOSEN BY MARTELLY AS LAMOTHE’S REPLACEMENT. THIS IS SUPPOSED TO BE AN IMPROVEMENT?? NO RESPECT FOR THE NATION!!”