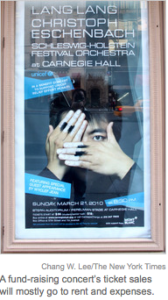 Lang Lang, the celebrity pianist; Christoph Eschenbach, the conductor; and the Schleswig-Holstein Festival Orchestra are taking the stage at Carnegie Hall on Sunday night in a concert trumpeted as a fund-raiser for the earthquake-ravaged Haiti. But what ticket buyers may not realize is that far more of their dollars will go toward concert-hall rent and marketing than to anyone in Haiti, with the biggest chunks going to stagehands and newspaper advertisements.

Even if the event’s nearly $200,000 worth of tickets sell out, less than $8,000 from the sales will go to the cause. The concert, though, is expected to raise some money, thanks mainly to a $50,000 subsidy by the Montblanc company and $10,000 by CAMI Music, the concert’s presenter and Mr. Lang’s management agency. Montblanc had promised to help pay for the concert well before it was transformed into a benefit, a decision made at Mr. Lang’s request. The performers, including Mr. Lang, are waiving their fees.

Officials of Unicef, the actual aid recipient, say that no matter how much money is earned, keeping Haiti in the public’s consciousness after the earthquake headlines have faded is invaluable.

“It’s an enormous profile raiser,” said Christopher de Bono, a Unicef spokesman in New York. “The fact that the donation may not have six zeros after it doesn’t mean it’s not worth making, that’s for sure.”

Unless it is to raise money for their pension funds, orchestras — nonprofit organizations that are generally short of cash — don’t often go in much for benefit concerts. Recent exceptions included events to help the Louisiana Philharmonic after Hurricane Katrina had hit New Orleans. On a different front, a number of orchestras are conducting a nationwide food drive, now in its second year, led partly by the League of American Orchestras. This project was propelled by the movie “The Soloist,” about a homeless musician in Los Angeles.

No hard and fast guidelines exist on how much money raised in a benefit should go for expenses, and it is not unusual for galas to raise little money or even lose it.

If anything, an examination of the Carnegie Hall concert’s finances demonstrates just how expensive it is to make music in New York, especially at the hall.

In an accounting provided by CAMI Music, the costs will total $181,590. If the hall sells out, box office proceeds will total $189,793, excluding complimentary tickets. About three dozen comps, for $74 seats, have been set aside, but some of those could be returned to the box office, the organizers said. The tickets are not tax-deductible.

As of midday Wednesday, the music agency said that $111,521 worth of tickets had been sold. The organizers expected a large last-minute turnout, particularly from patrons of Chinese origin, said Anastasia Boudanoque, the concert’s producer for CAMI Music, an affiliate of Columbia Artists Management. (Mr. Lang is a hero in his native China.) Ms. Boudanoque added that a social services organization in Chinatown, the Chinese-American Planning Council, had raised $5,000 for the cause.

Overhead at Carnegie accounts for about one-third of the expenses. The hall costs $13,785 to rent. Then there is $6,315 for ushers; $2,300 for security; and $42,535 for stagehand labor, long recognized as a major cost of doing business at the institution.

Other expenses include $70 for a press representative; $100 to establish a discount ticket system; $210 to place inserts in programs; and $750 for box office operations. Some costs are estimates, the presenters emphasized, and could be less.

Carnegie is donating the $1,875 cost of a sound system and $780 for other audio equipment, both added when Wyclef Jean, the Haitian musician, agreed to join Mr. Lang in a duet. Most of the other expenses are for marketing, publicity and transportation.

Marketing costs include $52,000 in advertisements in The New York Times at discounted nonprofit rates, Ms. Boudanoque said. The Times, a spokeswoman said, does not comment on advertising rates because of the many variables involved.

Jean-Jacques Cesbron, CAMI Music’s president, predicted in an e-mail message that the concert would raise “tens of thousands of dollars” for Haiti, despite the challenges of “high stage labor and marketing costs.”

Mr. Lang, in a telephone interview from Berlin on Tuesday evening, said that despite the costs of the benefit, the organizers would “absolutely hand a good check to Unicef.”

The concert “will bring a lot of awareness” to the suffering in Haiti, he said, adding that he would join Ann M. Veneman, Unicef’s executive director, in making an appeal from the stage.

Witnessing the suffering from a 2008 earthquake in Sichuan Province, Mr. Lang said, moved him to react to the quake in Haiti. “I know how children suffer,” he said. “We need to really help them.”

Mr. Lang is an official Unicef goodwill ambassador, and agency officials said he had worked hard to raise money for its work. They listed at least 20 events he had taken part in since 2004, including fund-raiser concerts, a trip to Tanzania, talks and media appearances.

Montblanc, for its part, has long been a major supporter of Unicef. And it was already a sponsor of Mr. Lang’s tour with the Schleswig-Holstein orchestra before the concert became a fund-raiser. Mr. Lang serves as chairman of the company’s cultural foundation.

Mr. Eschenbach will conduct the orchestra in Beethoven’s “Leonore” Overture No. 3, Mozart’s Piano Concerto No. 17 and Prokofiev’s Symphony No. 1 and Piano Concerto No. 3. The orchestra serves in residence at the Schleswig-Holstein festival, in northern Germany, and as a training vehicle for musicians under 27. Leonard Bernstein founded the festival, modeling it after Tanglewood.