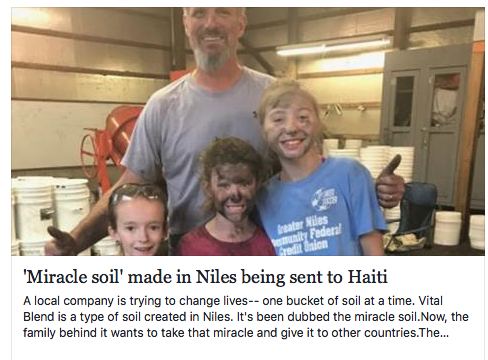 NILES — A local company is trying to change lives– one bucket of soil at a time. Vital Blend is a type of soil created in Niles. It’s been dubbed the miracle soil.

Now, the family behind it wants to take that miracle and give it to other countries.

The goal is to help replenish the soil in Haiti. It’s not a typical gift, but it’s one that they believe will keep on giving.

Mark and Laurie Mann have been working on the soil for years. They say the results are impressive.

“Literally, we were creating so much food, so quickly, that I thought this needs to go someplace where we have more problems in the world than we have in the United States,” said CEO of American Biochar, Mark Mann.

The Mann’s company, American BioChar, has teamed up with Starfysh Mission— a group that’s dedicated to restoring Haiti.

“Their biggest problem was they could not get the plants to survive in the soil and I said, ‘Oh I’ve been working on that for 25 years, I think I can help you,’” said Mann.

They’re taking all the help, big and small, that they can get.

“I learned more about it and then with all the soil and other stuff mixing, it was really fun,” said Genesis Downing.

10-year-old Genesis is not only learning a little about science, but humanity.

“Knowing how much we have in the U.S., how easily we take things for granted, and I think that’s just a great lesson for her to learn,” said Genesis’ mom, Tasha Lary.

For the Manns, Haiti is just the roots of their potential growth.

With those pounds of soil, the Manns say they can grow almost 2,500 plants.

They’re shipping it all down to Haiti in December.

The idea is generally pretty simple, give the Haitian people the resources – this soil – so they can grow their own food.

As soon as they’re done helping the people there, they’re going to do a little research and see the other places in the country and the world that may need them.