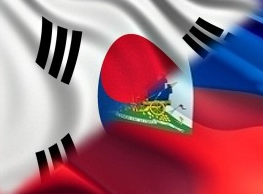 8 Korean textile factories established in Haiti : Elansia S.A., Centri Group S.A., Haiti Cheung Won S.A., Hansae Haiti S.A., H&H Textiles S.A., MBI HAITI S.A., Pacific sports Haiti S.A. and The Willbes Haitian S.A., which account for nearly one third of $926 million in exports and thousands of jobs, wrote to the Association of Industries of Haiti (ADIH), to express their deep concerns following the vote of the deputies on March 26 of a bill of law revising the minimum wage which proposes an increase of the minimum wage of the workers of the outsourcing of 78,5% https://www.haitilibre.com/en/news-27295-haiti-politic-revised-minimum-wages-according-to-the-bill-voted-by-the-deputies.html.

These companies say they are “very shocked and dissatisfied” and request the help of the ADIH to assure them that the increase of the minimum wage “is fixed taking into account the Haitian legislation and the realization of the studies carried out by the CSS [Superior Council of Wages] as it was last year.”

“If the proposal suggested by the Chamber of Deputies comes into force […] This will cause enormous damage not only to us, but to the population and to the whole sector” stating inter alia that the millions of dollars in planned investments for the next three years by Korean textile companies, can not be achieved, also anticipating immediate job losses.

Recall that beyond simple warnings the company S&H Global S.A, a Haitian subsidiary of Sae-A Trading Co. Ltd., one of the largest Korean apparel manufacturing companies in the world, which has invested $78 million to develop its operations in the Caracol Industrial Park (PIC) https://www.haitilibre.com/en/news-4360-haiti-economy-laying-of-the-foundation-stone-for-the-caracol-industrial-park.htmlhas already made the decision to expand in the Dominican Republic (initially planned in Haiti) thus depriving the Haitian economy of the creation of more than 10,000 jobs…