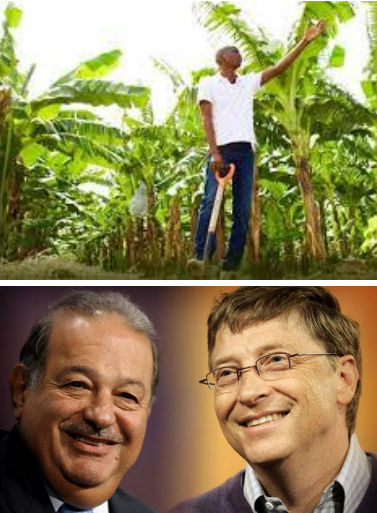 MEXICO CITY, Mexico (sentinel.ht) – A Mexican laboratory having investments from two Clinton confidants, tech billionaire Bill Gates and Mexican business magnate, Carlos Slim, created 150 tons of genetically modified corn seeds that were sent to Haiti. It is the largest seed shipment to any country in the history of the laboratory known as the International Maize and Wheat Improvement Center (CIMMYT).

The Haiti Sentinel has not, at the time of the publishing of this article, been able to determine the date of the shipment, the receiving party in Haiti, or if the seed shipment would be related to the launch of a new corn plantation on July 1, 2017 in North East, Haiti. Correspondences were sent to CIMMYT which has not yet returned our inquiry. Haiti Libre reported the presence of the seeds in Haiti on June 23, 2017.

None the less, the shipment of seeds called “Hugo” seeds are touted by the laboratory as being “renewed, improved maize seed(s) that will be sent to Haitian farmers to help jump-start the country’s seed sector, improve local food security and decrease malnutrition.”

CIMMYT began partnering with the United States Agency for International Development (USAID) in Haiti through a program called Feed the Future (FTF). During this time, they worked to produce a “renewed Hugo” corn seed for Haiti. They call this new seed “Hugo Plus” and it is said to be able to produce up to seven tons per hectare (~2.5 acres), compared to traditional varieties in Haiti which would only produce one ton per hectare.

CIMMYT scientists say the new seeds, of varieties now called “Mayi Plus I” and “Mayi Plus II”, outperform any other seed available in Haiti, in both irrigated and rain-fed environments. They say these varieties are currently under multiplication to be introduced to Haitian farmers as soon as possible.

Despite being offered seeds resistant to drought in a hunger-filled poverty-stricken nation like Haiti, Haitian farmers have shown to be far more resilient than the GMOs in rejecting their use in their farms. This is because history has shown, since The Green Revolution, that the genetically modified seeds created:

In Africa, Asia and even Mexico itself, CIMMYT seeds have seen resistance from farmers and concerned citizens that claim use of these seeds will put peoples’ sustenence needs in the hands of international nation-state-corporate actors who have only profits as their top priority.

COMMENT: HAITIAN-TRUTH.ORG
Jovenel Moise moves forward in his effort to keep promises to Haiti’s peasant population.
SEEDS, SEEDS, AND MORE SEEDS A KEY ELEMENT.
Within 90 to 120 days people will be consuming the first harvest.