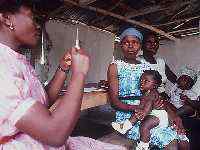 PORT-AU-PRINCE, Haiti – On July 15, 2011, to mark the fifty-eighth birthday of former President Jean-Bertrand Aristide, a gathering of volunteer medical doctors and nurses provided a free medical clinic in Port-au-Prince.

This year was special because of the return of Haiti’s first democratically elected and twice ousted President. Along with him has returned his two daughters and former-first lady Mildred Aristide (a long time champion of the fight against AIDS in Haiti).

As thousands of locals from the capital’s poorest slums, as well as activists from the Lavalas movement congregated inside the Aristide foundation, hundreds took part in medical exams. Medicines and food were also provided.

Work such as this has been going on for years. The Foundation’s Soulaje Lesprit Moun project has worked in seven camps to organize discussion and mutual aid groups. When the resources are available the Foundation has held mobile medical clinics in a number of camps.

The Foundation’s university, UniFA, is re-launching its medical school in fall. The medical school, Haiti’s first low-cost medical university geared toward the majority poor and aiming to keep its graduates inside the country, was shut down with the coup of 2004.

On the 15th of July supporters and organizers of Lavalas spoke about the many projects they had worked on in the past and the goals they had for the future. Most of the medical doctors present had begun their education at UniFA, and passionately advocated for its ongoing renewal.

Standing in a line one local resident explained, “Hundreds of us have seen doctors and we were able to get medications for free and dry food too.” Speaking to a video camera, one happy lady said: “Happy birthday to you President Titid [‘little priest’ is Aristide’s nickname among the masses]. We are happy that you are here in your country with us. We have not demonstrated in the streets today, instead we are together here receiving care.”

According to Toussaint Hilaire, an organizer with the foundation, members of Fanmi Lavalas were gathering at the foundation throughout the day to hold meetings. A few days prior a number of Lavalas organizers, activists as well as some former Fanmi Lavalas politicians met at the Foundation to discuss. “It was great time for many who had not seen each other for a long time… It was also a time for them to share. They’ve come together to show their solidarity and their support for President Aristide and the FL party,” Hilaire said.

Hilaire explained that “President Aristide is conscious of the situation of the population after the January 12th earthquake and he asked us to organize activities that have a social and educative aspects like a mobile clinic to mark his birthday.” Aristide and other leaders of the popular movement have been holding many small gatherings, meeting with people from the earthquake camps and across the country, hearing about the difficult times over the last year.