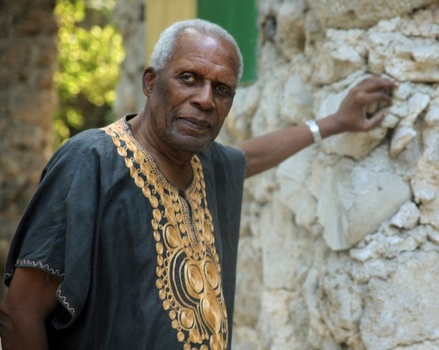 Planeloads of American paratroopers were in the air.

A team of Navy Seals was preparing to launch inflatable boats from a submarine off the coast.

Helicopters were poised to swoop in from the deck of an aircraft carrier with Delta Force operators.

And the planned midnight invasion of Haiti in 1994 might very well have gone ahead were it not for a voodoo priest named Max Beauvoir, known as the Houngan to the Stars.

At the time of his death last week, Beauvoir had risen to even greater eminence as the supreme leader of the 6,000 voodoo priests—houngans—in a nation of just 6 million.

But to this day, few people are aware of the role Beauvoir played in giving the Haitian military an out when then-President Bill Clinton told them that America was ready to intervene militarily if they did not reinstate the legitimately elected president, Jean-Bertrand Aristide.

Clinton himself may not be aware of the grand houngan’s influence at that critical moment, though the former president has known the name Max Beauvoir for four decades.

By wildest coincidence, Bill and Hillary Clinton had met Beauvoir back in 1975, while on a trip to Haiti organized by a friend as a wedding present.

Beauvoir was a doctor’s son who had only recently returned to Haiti, having been away studying chemistry at the City University of New York and biochemistry at the Sorbonne, after which he had led a team researching the synthesis of anabolic steroids.

Beauvoir had returned to Haiti in 1973 as a working chemical engineer. His life then took a turn as he stood with the rest of his family around his grandfather’s deathbed. The grandfather was a noted voodoo priest and he had singled out Beauvoir with a final request.

“Grandfather turned to me and said, ‘You will carry on the tradition,’” Beauvoir would later tell The New York Times. “It was not the sort of thing you could refuse.”

At the age of 37, Beauvoir took to studying voodoo, with its mix of Catholicism and the West African religion that the slaves had brought with them—a hybrid faith with a single God but 401 distinct spirits. He supported his French wife and his children by staging voodoo rituals for tourists who paid $10 a head.

Bill Clinton and his new bride, Hillary, were among those who visited. They arrived an hour early and Bill showed great interest in voodoo.

“[Beauvoir] explained that in voodoo, God is manifest to humans in sprits that present forces of light and darkness, good and evil,” Clinton would write in his memoir My Life.

The Clintons then watched a ceremony in which spirits were summoned to possess the dancers. A man ran a burning torch across his chest and tread on hot coals. A frenzied woman bit the head off a live chicken. The dancers collapsed as the spirits then departed.

“Haitians’ ideas of how God is manifest in our lives is very different from that of most Christians, Jews or Muslims,” Clinton wrote. “But their documented experiences certainly prove the old adage that the Lord works in mysterious ways.”

Clinton notes in his book that Beauvoir subsequently assisted a Harvard researcher who was investigating the origins of zombie tales. Beauvoir tipped him off to a secret poison extracted from the puffer fish that can paralyze and lower the breathing to where it seems that life has departed. Those who have been given just enough but not too much then revive as it wears off.

Haiti’s longtime dictator, François “Papa Doc” Duvalier, had made unfortunate use of houngans in his secret police, the Tontons Macoutes. Jean-Claude “Baby Doc” Duvalier took over after his father’s death in 1971 and did much the same.

Beauvoir pressed for houngans to be used not as witch doctors but as fill-ins for physicians in a nation where medical professionals were beyond scarce. Beauvoir also proclaimed that he and his fellow priests—not the country’s elite—were the true caretakers of Haitian culture.

That declaration and his high profile did not win Beauvoir great favor with the dictator who liked to think of himself as Haiti personified. Houngans were still associated with the Duvaliers and, after Baby Doc was deposed, dozens of voodoo priests were killed. Beauvoir’s house was encircled, but he escaped harm.

After laying low for a time, Beauvoir resumed putting on voodoo shows. Haiti, meanwhile, took another step out of its past when Jean-Bertrand Aristide became the country’s first democratically elected president.

Aristide was also a onetime Catholic priest, hardly a natural ally for a houngan associated, rightly or wrongly, with the Duvaliers. Beauvoir announced that he had begun to fear for his life and he departed for the United Sates, where he set out to “demystify” voodoo.

For many Americans, the word brings to mind voodoo dolls, pins and curses. Beauvoir assured all who listened that real voodoo practitioners do not stick pins in dolls.

Beauvoir was living in Washington, of all places, when Aristide was deposed. Bill Clinton had gone on to become our 42nd democratically elected president, and he threatened to send in the American military if Aristide were not returned to office.

The Haitian generals were initially defiant, but when they learned that the threat was just hours from becoming a reality, they seemed ready to find a way to give in.

But Clinton told the delegation that they had just 30 minutes before he ordered them to depart Haiti. The delegation suggested to the Haitian generals that they all quickly consult Émile Jonassaint, the provisional president who had been installed by the Haitian military.

The delegation was about to enter Jonassaint’s office when he made a desperate phone call to Max Beauvoir in Washington. Jonassaint asked the great houngan what he should say.

“Peace is better than war,” Beauvoir told him.

Moments later, the American delegation and the generals entered. Jonassaint made a declaration.

“We will take peace instead of war,” he said  “I will sign this agreement.”

That allowed the generals to tell themselves that Jonassaint was the one who had surrendered, not them. Carter informed Clinton that the deal was done and the invasion was called off.

Democracy was upheld, if not by voodoo alone, then certainly with the help of a houngan.

His fellow voodoo priests recognized his particular spirit, and in 2008 they democratically voted him the first supreme houngan.

When the big earthquake struck Haiti in 2010, some dunderheads such as Pat Robertson blamed voodoo. Beauvoir just shook his head. He did suggest that Haitians are less fearful of death because in the voodoo faith everybody lives 18 times, nine times as a man and nine times as a woman.

After what may or may not be his first death on Saturday at the age of 79, Beauvoir was widely declared a national treasure.