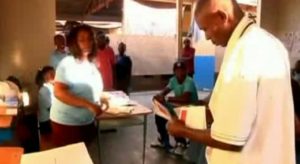 For 14 months, mason Michel Lifrand has lived in a wretched tent camp, desperate for relief, getting none. On Sunday, he sought help by marking an X on a paper ballot.

Amid the aftereffects of last year’s crushing earthquake and a heap of other problems, Lifrand and other Haitian voters went to the polls to choose a president in a runoff between Michel Martelly, a flamboyant singer of Haitian kompa music, and Mirlande Manigat, a university administrator and former first lady

“We want things to change,” said Lifrand, 40, who voted for Martelly next to the encampment where he has been since losing his home in the Jan. 12, 2010, quake. “It’s a hard life. After a year and a half, we’re still under these tents.”

Election officials sought to prevent the kind of disorganization and fraud that marred the chaotic first round of voting in November, which sparked weeks of tensions.

Both candidates are conservative, but miles apart in style and background.

Martelly, 50, known for obscenity-laced antics in his singing performances, ran as a youth-minded populist out to shake up the political system. Manigat, 70, tried to parlay her relative lack of charisma into a virtue by billing herself as a sober, maternal figure.

Official preliminary results are to be released March 31.

The next president will rule as the country hopes to rebuild from the earthquake and overcome a deadly cholera epidemic. Chronic poverty and joblessness also await action.

Some investors and donors have been waiting for elections to be decided before moving forward on earthquake-related projects, so the vote marked a key moment in a reconstruction that has crawled at a snail’s pace.

Many voters were unable to cast a ballot in the first-round election because they were left off the rolls, didn’t know where to vote or failed to receive voting cards in time.

Nerdine Francique, 25 and unemployed, showed up at 6 a.m. to vote at a school in the impoverished Cite Soleil neighborhood in Port-au-Prince, the capital. Nearly four hours later, she hadn’t found her name on voting lists nor gotten a response from the election commission via text messages, she said.

Francique, who shares a tent with two others, said she would check another site because she was determined to vote for Manigat. “A woman helping another woman,” she said.

Election officials said they had resolved balloting problems by afternoon and kept polls open an extra hour in the Port-au-Prince area.

The presidential race grew rancorous in the closing days, as rock-throwing troublemakers disrupted campaign events. Martelly disparaged Manigat’s credentials as a constitutional scholar, saying she lacked a law degree. Manigat said Martelly carried the whiff of a dictator in the making.

The last-minute appearance of former President Jean-Bertrand Aristide, who arrived Friday after seven years in exile, stoked fears of possible trouble, but it was unclear whether his presence had any effect on the voting.

The winner of Sunday’s vote will face difficult political terrain. No matter who triumphs, Parliament will be controlled by the party of outgoing President Rene Preval. The next president, with only a skimpy national budget, also will have to haggle with international donors over how to spend $10 billion pledged for reconstruction.

Many hope Haiti’s next leader moves more aggressively than Preval to solve issues such as where to build houses for the nearly 1 million people still living in tent camps. A number of recovery proposals have been on hold until the election season ends.

Haitians approached the vote with competing forms of faith. At a school in the capital’s hilly Petionville section, Pauline Clairveau, 22, gussied up with earrings and lip gloss to cast the first vote of her life. It would be for Martelly. Her sister Serfoni, 27, was less enthusiastic, pronouncing the candidates as “not serious.”

“Only Jesus can save Haiti,” she said.