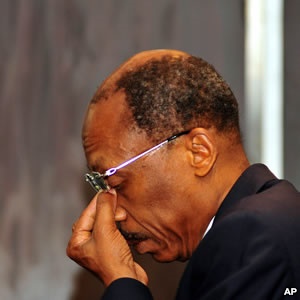 A fortune was spent by Aristide in an effort to generate a massive street demonstration as a protest against thr Michel Martelly presidency and as a remembrance of his September 29/30, 1991 removal from office by a nation that was truly tired of his murderous bands of criminals who killed opponents of Lavalas by hanging gasoline-soaked tires around the victim’s neck… then lighting this with a wooden match.

Dozens were killed in this barbarous manner.

The Haitian people have no interest in this shadow from the past.

Time for the American to open the sealed indictments and extradite this puddle of poo to the States for his control of Haiti’s cocaine traffic.

Michel Martelly’s popularity, with the masses, has effectively buried Aristide.

14 thoughts on “MARTELLY WINS!!! ARISTIDE LOSES – AGAIN!!! ARISTIDE FUNDED MASS PROTEST MARCH AGAINST MARTELLY GOVERNMENT & COMMEMORATING HIS REMOVAL FROM POWER SEPTEMBER 29, 1991 DRAWS A HUGE, I SAY HUGE 227 PEOPLE…NOT ENOUGH TO FILL A BOEING 737…. PROOF THAT ARISTIDE IS NO LONGER A FACTOR IN HAITI!!!”