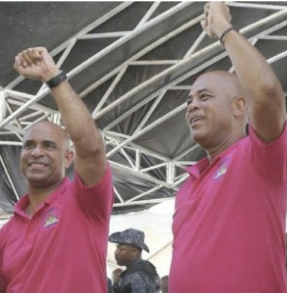 With the creation of a Mickey Mouse commission to come up with an answer to the Nations present crisis – in 8 days – looks like a simple formula, invented by President Martelly, to avoid personally firing Laurent Lamothe, our outstanding and talented Prime Minister. The commission will give him an apparent arm’s length distance from the betrayal of the center post of his government.

The Opposition really represent no one and has presented no platform, should they gain power. All they want is the removal of Prime Minister Lamothe.

Should they succeed, the next step will be a frontal attack on President Martelly and his family’s ongoing crimes. Sophia and Olivier continue to take our Nation’s funds. Kiko has done his best to destabilize the Martelly government and has never made any secret of his personal hatred for Prime Minister Lamothe.

The recent arrest of a senior PNH officer, in Leogane, associated with Kiko, and his removal to the States, where he is revealing all he knows about Kiko’s activities, was the event that launched the recent demonstrations against his brother-in-law’s government. And the Nation’s well-being.  American sources say he was moments away from an arrest when – some allege –  the American Ambassador told here buddy Sophia of the situation. Kiko immediately blamed Lamothe, and the fat was in the fire.

Other contacts suggest that Martelly and Lamothe had a long talk in which the President told his friend to do whatever was necessary.

Shortly after this meeting the President came up with the Mickey Mouse commission that will probably – because of its predictable make-up, suggest the removal of Prime Minister Lamothe and the creation of a new government.

Some have suggested that Sophia will be a candidate.
They say she has renounced her American citizenship, but this is impossible. To do so you must have a letter of clearance from the American Internal Revenue Service and this would require her declaration of all the money she has stolen or acquired under circumstances that would not stand up in an American court.

Michel Martelly does not understand that his personal survival, as President, depends on the survival of Prime Minister Lamothe.

Without Lamothe, we predict that Michel Martelly will be replaced by one of those Haitian inventions –  Council of State, Government of National Consensus, Seven Sages, Seven Dwarfs or some other idiotic concept.

This will open the door to Aristide’s team.

Senate President Desras is already pumping a fortune, into the opposition, in order to destroy Martelly.
He too plans to be president.
God help us!

6 thoughts on “MARTELLY SURRENDERS TO AN OPPOSITION WHO REPRESENT NOTHING, AND HAVE NO PROGRAMS – BUT REPRESENT A THREAT TO SOPHIA, OLIVIER AND KIKO?”