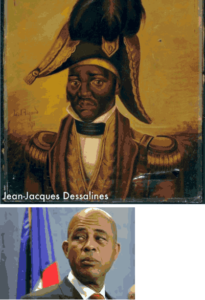 Aristide loyalists Terneb Delpe, Maryse Narcisss, John Joel Joseph, Moise Jean Charles, Arnel Belizaire and others did their best to generate a big anti-government manifestation in Port-au-Prince. On this occasion,

Aristide’s cash generated a bigger turn out than the 227 who marched in their last fiasco.

Martelly’s appearance generated a spontaneous crowd of over 20,000 when he presented his government’s plans for the future.

They are focused on simple chaos.

It is time for the Nation to focus on our future and make the best of what we have.

Aristide and his few have absolutely nothing to offer.

3 thoughts on “MARTELLY’S SPONTANEOUS CROWD OF OVER 20,000 DROWNS ARISTIDE’S PAID MOB OF FEWER THAN 3,000 AS THE NATION CELEBRATED THE ANNIVERSARY OF JEAN JACQUES DESSALINES’ DEATH OCTOBER 17, 1806… EVEN AS THE ENTIRE CUSTOMS SYSTEM WAS PARALYZED BY THE ARREST OF SEVERAL BECAUSE OF THE DISAPPEARANCE OF 3 CONTAINERS FROM PORT-AU-PRINCE’S DOCKS. SOME SUGGEST THEY CONTAINED A SHIPMENT OF WEAPONS AND MUNITIONS FOR ARISTIDE SUPPORTERS IN THEIR PLANNED WAR AGAINST THE DEMOCRATICALLY ELECTED GOVERNMENT.”