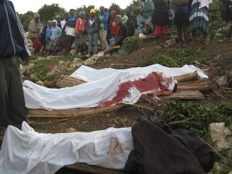 Monday, July 23, around noon, a squad composed of 36 officers of the Departmental Unit of Law Enforcement (UDMO), directed by the Departmental Director of the PNH, accompanied by the Departmental Delegate of Southeast, the Government Commissioner and a Judge of Peace, went to Seguin [Commune of Marigot] specifically at Parc La Visite, aboard six vehicles and an ambulance of the Haitian Red Cross to launch an operation aimed at evicting 140 families, who illegally occupied [since 1942!], a part of this park. An operation that unfortunately went wrong.

There are already several days, the Central Government had ordered the evacuation of these families, by the bais of the Ministry of the Environment and the Ministry of Public Security and of instructions were given to departmental authorities, to enforce the law.

Furious of this muscular invasion and armed, the local population confronted the police and thrown stones, according to witness the operation lasted 2 hours. Many shot were fired against the protesters and at least 8 people were killed and 5 policemen wounded. However, until now, only the bodies of four victims have been found and identified [Désir Enoz – 32 ; Nicolas David – 28, Robinson Volcin – 22 and Désir Aleis – 18], 4 children are reported missing, 3 houses have been completely destroyed by fire and 4 others were sacked, 3 oxen have been killed.

Yet the day after this tragic incident, Ovilma Sagesse the Director of the Police of Southeast, said the opposite of the statements asserting that only 5 police officers were injured by the occupants of the Park “Given the aggressiveness of these individuals, we had to suspend the operation to avoid here are victims…” The victims’ bodies at Parc La Visite, however, attest to the contrary…

The only element available in this negotiation, was an envelope of 50,000 gourdes, promised to each family (50% before departure, 50% after). However, the offer, that offers no place of relocation was rejected by the families involved, who believes this amount insufficient to enable them to purchase land, find a plot of good farmland, and relocate.

Recall that the La Visite Park, is a nature reserve on the heights of the hills, halfway between the villages of Marigot and Kenskoff respectively southeast and west. Since 1942, people from neighboring towns, settled on parts of this natural reserve, clearing forest cover for agriculture. By its groundwater, this nature reserve is also a water reservoir for the departments of the West and of Southeast through the capital Port-au-Prince and Jacmel.

In the opinion of environmental experts, the level of groundwater decreased substantially over the years and the effects are visible in the watershed and in the two cities mentioned. Recommendations were made ​​to the Government to take measures to protect the reserve, including the departure of these 140 families.