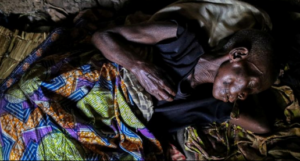 FILE PHOTO: A woman, 60, who is suffering from malaria rests in her house at Kagorwa Pygmy camp on Idjwi island in the Democratic Republic of Congo  (Copyright Reuters 2017)

DAVOS, Switzerland –  When it comes to fighting malaria, Bill Gates and Ray Chambers are both inspired and concerned: With victory in sight, will the world’s new leaders commit to finally beating this persistent parasite?

In exclusive interviews with Reuters in Davos, Gates and Chambers both voiced concern about leadership changes in the U.S. and in United Nations bodies and what these might mean for funding and commitment to global health.

“The imponderable is what happens with President Trump,” said Chambers, the United Nations special envoy for malaria.

Doctor Steven Gundry explains an easy way to fix your fatigue and get more energy. Do this daily and

Falls in deaths and infections due to the mosquito-borne parasite in the past 15 years are “one of the greatest success stories in the history of public health”, Chambers said.

And Gates, whose Gates Foundation commits vast funds to global health projects, said the world has never been closer to ending malaria “once and for all”.

But with the disease still killing a child in Africa every few minutes, those eager to finish the job are worried that the presidency of the United States – a crucial funding source for international malaria control efforts – is now passing to a man whose commitment to global health projects is uncertain.

And with looming leadership changes at organizations key to global health and development aid – the heads of the United Nations, the World Health Organization, the Global Fund to Fight AIDS, Tuberculosis and Malaria, and the World Bank – malaria champions say the risk of setbacks is unnerving.

WELL ON THE WAY

It is almost a decade since Gates first dared to revive what in global health circles is known as the “e-word” in relation to this ancient disease.

“We will not stop working until malaria is eradicated,” Gates declared in 2007.

Now, half the world’s nations are malaria-free, and since 2000, global malaria deaths have dropped by 60 percent. In Africa, where the vast majority of malaria deaths occur, the malaria death rate has come down by more than 70 percent.

But there’s still much to do. Despite a steep rise in malaria spending from 2000 to 2010, it has now plateaued.

Funding in 2015 was less than in 2013, with combined international and domestic sources totaling $2.9 billion. Even this is only 45 percent of what malaria experts say is needed annually to reach a target of a 40 percent reduction in malaria incidence and mortality by 2020.

The U.S. is by far largest international malaria donor, accounting for about 35 percent of total funds in 2015, followed by Britain, at 16 percent.

The U.S. government-funded President’s Malaria Initiative has been a powerful force in the past decade, and monies for that rose above 600 million pounds in 2016 from $30 million in 2006.

Gates said he hoped the new Trump administration would continue crucial malaria commitments, which he noted were ratcheted up by the previous Republican President, George W Bush, and maintained at those levels by President Barack Obama.

In a recent meeting with Trump, Gates said, they talked about malaria, among other things, and had “good discussions”.

“I wouldn’t say we see a huge risk of those funds going away, but (this is) a time when we’re trying to raise the ambition,” Gates said. “Whenever there’s transition it’s an opportunity. We want to step in and work with the new people.”

It will work on new ways to help affected countries and regions fight their own malaria battles, with the hope that this will encourage major donors to stay on board.

“There’s a real desire coming out of the United States government, the UK government and others to see endemic domestic countries contribute more of their own capital towards fighting these diseases,” said Chambers. “We need innovative, unique and creative ways of financing this.”