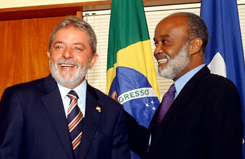 During the Yalta Summit in World War II, Churchill and Roosevelt once pressed Stalin for his candid assessment of Hitler’s qualities as a wartime leader. Stalin immediately replied, “Hitler was a genius, but he never knew when to stop.”
Many citizens of South America are beginning to wonder if Venezuela’s President Hugo Chavez and Cuba’s President Fidel Castro – like Adolph Hitler – will know when to stop.
Unfortunately, the issue of misbehavior by Chavez and Castro is at the top of Latin America’s political agenda today. In the aftermath of devastating earthquakes in Haiti and Chile the last thing Latin America needs are serious new problems, especially when these new problems exist as a result of the irresponsible actions of Hugo Chavez and Fidel Castro.
In recent weeks, for example, Chavez and Castro have pushed a propaganda campaign that “Haiti is heading for crisis,” and that the true intent of UN-directed US-Brazilian military operations in Haiti is to stage a “US military occupation” of Haiti. Chavez and Castro intend that their anti-US propaganda campaign would boost the popularity of former dictator Jean Bertrand Aristide, who is now in exile in South Africa but would like to return to power in Haiti. Most experts on Haitian politics agree thi is a bad idea because Aristide’s return would bring even greater instability and suffering to Haiti and the region.

So far, Brazil’s President Lula da Silva has been unwilling to condemn this irresponsible rhetoric by Chavez and Castro, despite the presence of Brazil’s peacekeepers in Haiti. Lula’s silence shames of all who want Brazil to become a Superpower by acting like a Superpower, especially in Brazil’s home region. Lula’s silence will also tempt Chavez and Castro to escalate further in Haiti.

Does Hugo Chavez know when to stop? Apparently Chavez does not know when to stop in view of his anti-US rhetoric on Haiti. Moreover, the Chavez-Castro escalation comes at a dangerous time in Latin America. Two weeks ago the South Americans could hope that the Chavez-Castro excesses would be deterred by a new right wing Chilean government. The hope that Chile will be a deterrent against Chavez and Castro is gone, at least for the moment, due to the devastation caused by the recent earthquakes.
So, if a right wing Chilean deterrent to Chavez and Castro is out, what are the chances of a left wing deterrent built on Russian and Chinese apprehensions about an emerging Iran-Venezuela-Cuba Axis in Latin America? What South American president could work with Russia and China om left wing options to stop Iranian president Ahmadinejad, Chavez and Castro?

His name is Lula da Silva, and he is president of a country – Brazil – that wants to become a Superpower. If Lula protects Haiti and the Caribbean, he will take a giant step towards Superpower status. Lula can then turn his attention towards protecting other neighbors – the Andean states — against Iran, Chavez and Castro. Finally, Lula can ask Chavez and Castro to open their intelligence files to reveal the objectives of Chavez’s Iran-Venezuela-Cuba “strategic partnership” in Latin America.
We will be first to deliver an important piece of bad news for Chavez and Castro, news that that will bring joy to the vast majority of South Americans. Russia and China are infuriated with today’s Ahmadinejad- Chavez-Castro ultra-leftist provocations. These militants remind Russia and China of another South American firebrand and the self-proclaimed leader of South America’s only “honest communist forces,” Ernesto “Che” Guevara.

During the 1960’s Guevara’s main propaganda line was that Russia and China were pro-US lapdogs who betrayed South American revolution because they rejected Guevara’s ultra-leftist theories on military affairs. In reality, Che Guevara and his supporters downplayed several important the lessons from the Russian and Chinese revolutions that contradicted his miliary advice to place all focus on combat in rural areas, ignore Western trained military officers, and put faith on peoples war rathrer than on advanced weapons, The lessons from the Russian and Chinese revolutions were just the opposite — i,e., in the final analysis, the key to a communist victory in Russia was to devote far more military attention to urban areas as to rural areas; to ensure in both Russia and China that the revolutionary military forces were commanded by highly skilled officers, many of them bourgeois in outlook; to reject advice from self-appointed ultra-leftist militants that so-called “subjective factors” such as faith in communist ideology would outweigh “objective factors” in winning battles, a logic that justified denying the revolutionary forces’ requests for superiority in weapons , training, and military commanders.

In short, Russia and China rejected Che Guevara’s ultra-leftist military theories based on their own revolutionary experience, not because Russia and China were subservient to the US, as Guevara asserted. On the basis of his ultra-leftist theories Guevara was convinced that with as few as fifty highly trained communist partisans in Bolivia he could mobilize the Inca masses in rural areas in a racist war against residents in urban areas, Hispanics and gringos. Guevara’s theories failed because they represented more the concepts of Mussolini’s fascism and Franco’s syndicalism than the tenets of Marxism-Leninism. Guevara’s theories demonstrably failed because they led him to an early death in 1968 Bolivia and the destruction of his entire Bolivian military campaign.

President Lula da Silva, take note. Brazil can join with Iran, Chavez, Castro, and Evo Morales, or alternatively, with the United States, Russia and China. The first path — which Lula is on today — will tragically lead Brazil into regional isolation, poverty, and the quicksand of pseudo-communist sectarian politics. Lula can see this future for himself by viewing today’s chaotic Bolivia. Lula will soon discover that today’s China refuses to invest in Bolivia because Beijing sees Chavez ally Evo Morales as a reactionary who is a poisonous combination of Chiang Ching and the Dali Lama.

Again, if the first path would lead to Lula’s decline and defeat by joining Brazil with Iran, Chavez, Castro, and Evo Morales, the second path will lead Brazil to Superpower status in military affairs by aligning with Russia and China, as well as to enduring prosperity by aligning Brazil with the capitalist states. When Lula thinks of Brazil in 50 years, does Lula see Brazil as another Bolivia or another Chile? Which path will Lula take?

Scott Sullivan is a former Washington government employee and was the Senior Advisor for International Economics at the Crisis Management Center of the National Security Council, 1984 -1986. Petroleumworld not necessarily share these views.

This is a very good analytical article that deals with a very important reality, in this area: The importance of Brazil’s Lulu in guaranteeing the stability in this region.

All too often, those in North America, discount today’s world with the declining influence of USA/CANADA in hemispheric affairs …and the increasing importance of the Left and Righ in Central and South America.

Lulu visited Haiti last week and had a confrontational meeting with President Preval. He was upset about Preval’s failure to deal with the challenges forced upon his government by the January 12 quake.

He was especially forceful about the fact his government had offered – 3 YEARS AGO!! -to construct a large hydroelectric facility in the Peligre Valley. The Brazilian army was going to carry out the construction project and has, – long ago – carried out the required feasibility study. Preval has yet to give Haiti’s approval….suggesting that the peasants might protest against it.

When did Preval ever give a damn about the peasants’ well-being?

He is presently stealing all of the food and material assistance the International Community has sent to them!!

The nation is in desperate need for electrical power. Lulu’s Brazil offered a solution to this problem and Preval has ignored this.

During a conversation with influential members of the MINUSTAH team, Lulu said he would withdraw Brazil’s military contingent from MINUSTAH, if he could do this without losing face.

Brazil’s Lulu can save the Haitian nation from total disaster by using his influence to remove Preval from the Presidency.

SOMEONE MUST SPEAK FOR THE HAITIAN PEOPLE.

IT WILL NOT BE THE SO-CALLED POLITICAL OR BUSINESS LEADERS IN HAITI,

IT WILL NOT BE THE CHAMBRE OF DEPUTIES OR SENATE.

IT WILL NOT BE THE CHURCH.

THE UNITED NATIONS SEEMS TO BE ON AUTOPILOT, WISHING TO KEEP PREVAL IN PLACE FOR STABILITY.

PERHAPS LULU CAN SPEAK FOR THE HAITIAN MAJORITY…A MAJORITY THAT LOVES BRAZIL, THEIR SOCCER TEAM AND MOST OTHER THINGS.

LULU, THE HAITIANS ARE WAITING FOR YOU TO SAY SOMETHING.