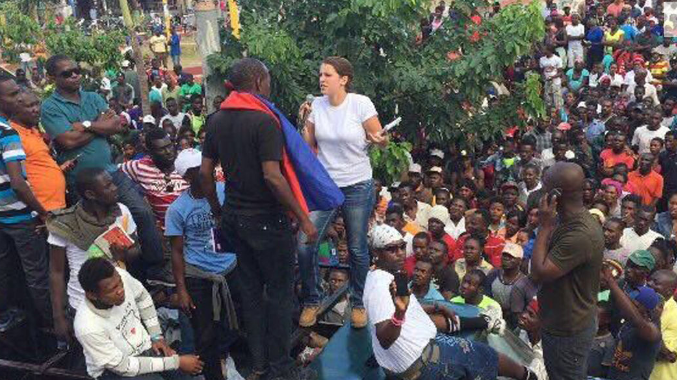 JÉRÉMIE, Haiti — After five days of hiding in a darkened Haitian home amid the sounds of gunfire, anti-American riots and chants of “kill Americans,” Kate Bartow of Hadley decided to come out of the shadows.

“I thought, ‘This is not a time to run,’” she said by phone from Haiti this week. “I thought, ‘I can hide or make a stand.’ I felt like I wanted to talk to the leaders of the riots.”

Bartow, 23, who has been coming to Haiti with her parents Bryan and Lisa Bartow, also of Hadley, since she was a baby, is currently on the island to help the people living in Jérémie continue to mend after the devastating effects of Hurricane Matthew.

Arriving in Jérémie — the capitol city of the Grand’ Anse department — on Jan. 5, Bartow found herself in the middle of unforeseen chaos. Her most recent trip to the hurricane-ravaged city collided with the arrest of local populist hero and senator-elect Guy Philippe, who has been on the U.S. Drug Enforcement Agency’s most-wanted list for many years.

After a relaxing first day in Jérémie with family friends and cooking with her Haitian Mama, as she calls her, Bartow was settling into the new bedroom they had built for her. On day two of her visit, she admired her friend’s new roof and helped paint newly constructed rooms.

But a taxi trip into the downtown area dramatically changed her visit.

“I felt a tension in the air. All of a sudden, hundreds of people were running towards us, yelling. Hundreds of people were sprinting through town, chanting and waving anything they can get their hands on,” she said. “Burning tires littered the streets and the town was covered in thick, billowing smoke.”

During an initial hearing before U.S. Magistrate Judge Barry L. Garber in Miami federal court, Philippe was ordered held without bond, according to the U.S. Attorney’s Office.

When word of the newly elected senator’s arrest and swift extradition spread, Haitian lawmakers challenged the legality of such a move and riots erupted in Jérémie’s streets. There were reports of increasing violence with Haitians scouring hotels to kidnap and kill foreigners.

Bartow said protesters ransacked Hotel La Cabane where a group of Americans were staying. “The blan (white Americans) had enough time to have a helicopter evacuate them,” she said. “They (rioters) went through the whole hotel. They also went to an orphanage where they knew blan were staying and stole suitcases and passports.”

“The rioters said, ‘Since Guy Philippe was taken from us, we are going to take blan.’ And they were searching all over the village and in hotels to take blan and kidnap them. The UN came and they escorted Americans out,” Bartow said. “I was the last blan here; everyone was saying, ‘Leave.’ ”

Bartow, who is part Haitian on her mother’s side, said the she does not know if the accounts of Philippe’s crimes are true, but she does know that Haitians see him as their only hope.

“He stood up against Aristide when no one else would,” she said, referring to former Haitian President Jean-Bertrand Aristide. “They need him back. They say the U.S. walked on them and that is very offensive. They feel like the Americans attacked their sovereignty through the extradition of Guy Philippe. They say the ‘U.S. has walked on us because we are little.’ ”

While head of police in 2004, Philippe, often referred to as a rebel leader, allegedly orchestrated a coup d’état against Aristide and was responsible for his eventual ouster.

“I’m half Haitian. Jérémie is my Mom’s hometown,” she said. “My great-grandpa was Haitian and he founded 10 churches outside of Jérémie.”

And just like her daughter, Lisa has been going to Haiti since she was a baby and now continues her family legacy of supporting the people who live there through their Full Life Crusade (FLC7.com) nonprofit.

Still, she was not certain how the protesters would react to her daughter being there at this time.

“I didn’t know how the Haitians would respond to her … she was staying with friends of our family, they have been our friends for 30 or 40 years,” she said, adding that her husband was the best man in the couple’s wedding. “As a mom, it’s pretty awful to know your kids are in danger, as every soldier’s mother also knows. However, trusting in God’s guidance and provision is how we are able to do the things we’ve done.”

When there is not a crisis, the Bartows go to visit people in the countryside several times a year, just like her great-grandfather did, to love them and share time with them, she said. And they take groups from the Glens Falls area on trips with them. But during an emergency, like the recent hurricane, they step in with aid.

“We have been taking teams to Haiti for 25 years — church groups, medical teams, dental teams, you name it. Depending on the team and their focus, we put a custom trip together for them where they can work within our churches,” Lisa said. “We make it a point to connect Americans with the Haitian people so that they come away with a very authentic experience.”

About two weeks after Hurricane Matthew, the Bartows and others from the Glens Falls region traveled to Haiti to help the wounded. And since then, the Bartows and FLC have been gathering building supplies and tools to help rebuild homes.

Emergency nurse Jen Rayder of Stony Creek has been on two trips to Haiti with the Bartows. “I love the Bartows, they do things very differently than other missions,” she said. “The Bartows meet the Haitians where they are at. They don’t try to Americanize them. And the Haitians are so thankful for everything … it is so rewarding to have someone say ‘thank you.’ ”

Currently, there is a container packed with building supplies and tools sitting in customs in Port au Prince, Lisa said, adding that many of the people still do not have any shelter. “It’s tragic. The people don’t have homes or roofs.”

“The building supplies, temporary shelters, tarps, were purchased with donations to FLC. We dealt with Curtis Lumber in Warrensburg and Tractor Supply in Queensbury,” Lisa said of their current aid. “Depending on how the supplies are used, up to 1,500 families in 11 communities could be touched. Some may go to community shelters rather than individual homes. Right now we are raising money toward the purchase of a saw mill we can ship down so as not to see all the downed trees go to waste. Those can be turned into building materials as well.”

Opening the door for aid

When Kate Bartow decided to come out of hiding, she met with protest leaders in Jérémie and single-handedly negotiated a peace agreement. And because of Bartow’s pacification of angered leaders, a handful of American aid workers can now return to the hurricane-ravaged region.

Bartow tells the story of her meeting about 10 days ago.

“I went in the dark of the night to an area of Jérémie I had never been. There was a guard at the gate and there were two big metal doors. We entered and were in a room totally empty except for a generator and a small dim light bulb hanging from a wire. We continue through and there is a long hallway with a light at the end,” Bartow said of her harrowing middle of the night meeting. “We walk through the long hallway and into a room full of men sitting in a circle. They are big and strong, wearing tight T-shirts, gold chains. They asked, ‘Why are you here?’”

She said she told them she wanted to stand with them.

“They were impressed that this white girl with a skinny Haitian came to talk to them. They could have kidnapped or killed us … I was not nervous, I was not afraid,” she said. “I’m a firm believer in God and I prayed about it … you can’t be driven by fear. They asked me to walk with them in the rally the next day and to meet them in the morning.”

In telling her story, Bartow said she arrived at the leader’s home and he was wearing a white T-shirt, along with the crew, and he sent someone out to buy her a white T-shirt before they walked.

She explained that she was in a rough part of town and the march started at his home.

“I am standing in front with him and his men. As we march, more and more follow. Two hundred. Three hundred. Four hundred. People stare at me,” Bartow writes in her blog about Haiti. “No one kisses and winks at me like they usually do. They just watch me with respect. I am for them. We arrive at the town square and hundreds of people are packed tightly together. Holding signs high and cheering for the freedom of Guy Philippe. I have never experienced anything like this. We get on a truck and the leader speaks and sings into the microphone. There are thousands of people following. The march lasts for six hours. Speeches and songs. It is powerful. Everyone stands together.”

As the march comes to a close, the leaders give Bartow the microphone. “I tell everyone that all Americans are not against them,” she said. “Everyone has seen me, everyone knows who I am. I am safe. Our people are safe. I was in the right place at the right time and I am glad I got to stand for Haitians and Americans.”

Bartow said she now travels freely throughout Jérémie and if an American is coming to help, she gives the leaders their picture and they are allowed to enter the city.

“What is brilliant about this is Kate has assured the safe passage of relief,” Lisa Bartow said. “We are involved in Haiti because we love the people. It’s that simple. They are some of our closest friends.”