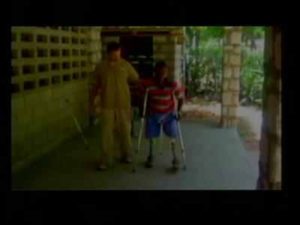 A national prosthetics company with several locations in the north state continues to make a difference nearly a world away.

It’s been more than a year and a half since the devastating earthquake ravaged Haiti.

While many have put the disaster behind them, the need for amputee relief is still in high demand.

This program was implemented just weeks after the January 12th earthquake hit in 2010.

Since then dozens of doctors and prosthetists have visited the clinic, including Mark O’Sullivan from Red Bluff to treat more than 800 Haitian amputees.

O’Sullivan says, “I think I got more out of my experience than I was able to give.”

But the 20 patients O’Sullivan treated in Haiti would probably beg to differ.

Just two weeks ago, O’Sullivan returned from a two week stint at the Albert Schweitzer Hospital in Deschapelles, Haiti, located about two hours from Port-Au-Prince.

Hanger Prosthetics started the Haitian Amputee Coalition right after the earthquake and in February of 2010 started sending down American prosthetic professionals.

O’Sullivan adds, “It was really interesting to go see some of the limbs actually collected in Shasta, Tehama and Butte Counties and actually see them in Haiti ready to be delivered on some other patients.”

But it was the spirited patients that were nothing short of inspiring for O’Sullivan, who also has a prosthetic limb.

“Their spirit was remarkable, just the spirit they had, the spirit to rebound. For example, I fit one young boy with a prosthesis, he immediately stepped into his prosthesis, saw a soccer ball on the floor of the room and ran over and grabbed that soccer ball and started to kick it around.”

The care at the Hanger Clinic is comparable to the US clinics, and volunteers will continue to travel to Haiti until it’s self-sustaining.

Hanger Clinics in Chico, Red Bluff and Redding are still accepting new and used prosthetics for the Haitian drive.